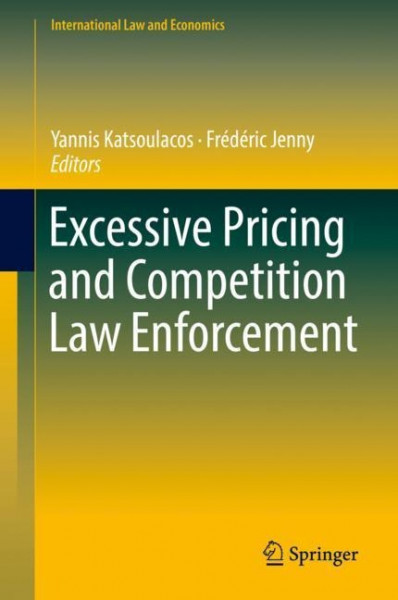 This volume examines the controversy surrounding the use of competition law to combat excessive pricing. While high or monopolistic pricing is not regarded as an antitrust violation in the US, employing abuse of dominance provisions in competition laws to fight excessive pricing has gained popularity in some BRICS jurisdictions and a number of EU-member states in recent years. The book begins by discussing the economic arguments for and against the prohibition of excessive or unfair prices by firms with market power. It then presents various country studies, focusing on developed countries (such as the UK and Israel) and on the BRICS countries, to highlight various practical challenges involved in recognizing excessive prices as abusive conduct on the part of dominant firms, including how to define, measure and identify excessive prices. The contributors also discuss other policy options that can be used to fight excessive prices in order to protect consumer welfare. von Jenny, Frédéric und Katsoulacos, Yannis

Yannis S. Katsoulacos is a professor at the Athens University of Economics and Business, Dept. of Economic Science (1994-) and chairman of the Department (2011-) in Greece and has been University Vice-Rector (2007-2011) and Post-graduate Studies Director for Applied Economics and Finance (2000-). He received his Ph.D. and M.Sc. in economics from the London School of Economics. He specializes and has published widely in competition and regulation economics and policy, industrial organisation, environmental policy and the economics of technological change. He was a research fellow at the London Centre of Economic Policy Research (CEPR, 1992-2001) and has published over 85 articles (over 30 in international, including leading, refereed journals) and 9 books on industrial organisation, competition policy, the economics of technical change and the New Economy. Since 2006, he has organized the CRESSE Annual International Summer School and Conference in Competition and Regulation in Greece. Frédéric Jenny is a Professor of Economics at ESSEC Business School in Paris, France. He has been chairman of the OECD Competition Committee since 1994, and co-director of the European Center for Law and Economics of ESSEC since 2008. He was previously non-executive director of the Office of Fair Trading in the United Kingdom (2007-2014), a judge on the French Supreme Court (Cour de cassation, Economic Commercial and Financial Chamber) from 2004 to 2012, vice-chair of the French Competition Authority (1993-2004) and president of the WTO Working Group on Trade and Competition (1997-2004). He holds a Ph.D. in economics from Harvard University (1975), a Doctorate in economics from the University of Paris (1977) and an MBA from ESSEC Business School (1966).