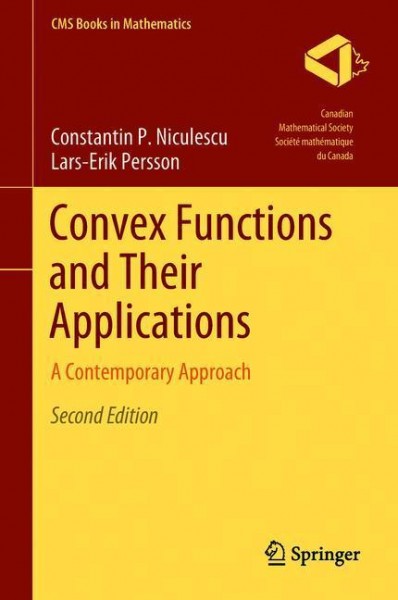 Convex Functions and Their Applications

Convex Functions and Their Applications
A Contemporary Approach

Constantin P. Niculescu is professor emeritus at the University of Craiova, Romania, and a member of the Academy of Romanian Scientists. He received his Ph.D. from the University of Bucharest in 1974. He published more than one hundred papers and several books in functional analysis, operator theory, convex analysis, ergodic theory, history and heuristics of mathematics and has received several prizes both for research and exposition. Lars-Erik Persson is a Professor of Mathematics at Luleå University of Technology, Sweden, and also at UiT, The Artic University of Norway. He is honorary Professor at Eurasian National University, Kazakhstan, and he has served as President of the Swedish Mathematical Society. He received his doctorate from Umeå University in 1974. Dr. Persson has published around 300 papers on functional analysis, interpolation of operators, Fourier analysis, function theory, inequalities and homogenization theory. He has been a supervisor for 62 students with PhD exams and he has received several awards both for research and teaching.