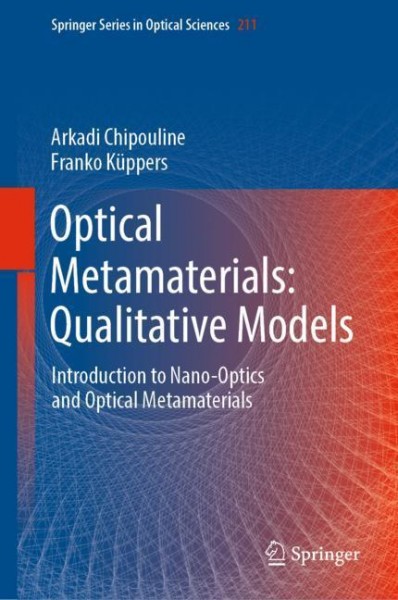 This textbook bridges the gap between university courses on electrodynamics and the knowledge needed to successfully address the problem of electrodynamics of metamaterials. It appeals to both experimentalists and theoreticians who are interested in the physical basics of metamaterials and plasmonics. Focusing on qualitative fundamental treatment as opposed to quantitative numerical treatment, it covers the phenomena of artificial magnetization at high frequencies, and discusses homogenization procedures and the basics of quantum dynamics in detail. By considering different phenomena it creates a self-consistent qualitative picture to explain most observable phenomena. This allows readers to develop a better understanding of the concepts, and helps to create a conceptual approach, which is especially important in educational contexts. This clearly written book includes problems and solutions for each chapter, which can be used for seminars and homework, as well as qualitative models that are helpful to students. von Chipouline, Arkadi

Arkadi Chipoulin graduated from Moscow Institute of Physics and Technology, Russia (MS 1989) and obtained his PhD at the General Physics Institute, Russian Academy of Science, Moscow, Russia in1995. He worked at the Institute of Applied Physics, Friedrich-Schiller University of Jena, Germany from 1995 to 1999 and from 2005 to 2015, the University of Utah, USA from 1999 to 2001, and at the CORVIS Corporation, USA from 2001 to 2005.He completed his "habilitation" in Experimental Physics at Friedrich-Schiller University of Jena, Germany in 2015.In September 2017 he joined the Skolkovo Institute of Science and Technology as a professor at the Center of Photonics and Quantum Materials.He has supervised numerous projects in collaboration with various scientific Centers in Europe and USA in areas including nanophotonics, nanoplasmonics, optical metamaterials, dynamics of quantum systems, resonance interaction between quantum and classical plasmonic systems, laser physics und optoelectronics, optical waveguides, optical amplifiers, nonlinear optics, fiber optics communication systems, and optics of micro resonators.His teaching expertise includes lecture and practical courses in the areas of quantum mechanics, photonics, nano-optics, fiber-optic communication systems. Professor Chipouline (Shipulin) is a reviewer of numerous journals, such as Nature Photonics, Nature Communication, Laser Focus Word, Optics Express, JOSA, IOP, ACS, EPL, Photonics and Nanostructures, the New Journal of Physics, Optical Engineering, Photonics and Nanostructures, and SPIE. Franko Küppers received his Ph.D. (Dr.-Ing.) degree from TU Kaiserslautern, Germany. He worked at Siemens and at Deutsche Telekom where he directed the Optical Networks research group and the Photonic Systems department at the Research and Technology Center in Darmstadt, Germany, until 2002. In 2003, he joined the College of Optical Sciences, University of Arizona, Tucson, Arizona, USA, where he served as a tenured associate professor of Optical Sciences, set up and ran the Photonic Telecommunication Systems research group, and served as a PI and testbed lead for the NSF Engineering Research Center for Integrated Access Networks (ERC CIAN), with which he is still associated in his position as an adjunct professor at UA OSC.Dr. Küppers has published more than 150 scientific articles and was the guest editor of the IEEE OSA Journal of Lightwave Technology Special Issue on 40 Gb/s Lightwave Systems. He has received the US National Science Foundation CAREER Award, the Science Foundation Arizona Competitive Advantage Award, and the University of Arizona / College of Optical Sciences Award of Distinction for Outstanding Undergraduate Teaching. He is a senior member of the IEEE and a fellow of SPIE.Since 2011, Dr. Küppers has directed the Institute for Microwave Engineering and Photonics at TU Darmstadt, Germany, where he also holds the chair of Photonics and Optical Communications.