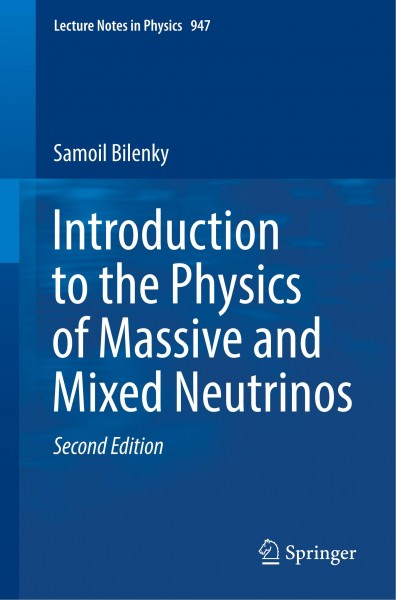 Introduction to the Physics of Massive and Mixed Neutrinos

Introduction to the Physics of Massive and Mixed Neutrinos

Small neutrino masses are the first signs of new physics beyond the Standard Model of particle physics. Since the first edition of this textbook appeared in 2010, the Nobel Prize has been awarded "for the discovery of neutrino oscillations, which shows that neutrinos have mass". The measurement of the small neutrino mixing angle $\theta_{13}$ in 2012, launched the precision stage of the investigation of neutrino oscillations. This measurement now allows such fundamental problems as the three-neutrino mass spectrum - is it normal or inverted? - and the $CP$ violation in the lepton sector to be tackled. In order to understand the origin of small neutrino masses, it remains crucial to reveal the nature of neutrinos with definite masses: are they Dirac neutrinos possessing a conserved lepton number, which distinguishes neutrinos and antineutrinos, or are they Majorana neutrinos with identical neutrinos and antineutrinos? Experiments searching for the neutrinoless double beta decay are presently under way to answer this fundamental question. The second edition of this book comprehensively discusses all these important recent developments. Based on numerous lectures given by the author, a pioneer of modern neutrino physics (recipient of the Bruno Pontecorvo Prize 2002), at different institutions and schools, it offers a gentle yet detailed introduction to the physics of massive and mixed neutrinos that prepares graduate students and young researchers entering the field for the exciting years ahead in neutrino physics. von Bilenky, Samoil

Samoil Bilenky (*1928) is known as one of the pioneers in modern neutrino physics. A long-standing collaborator of Bruno Pontecorvo (1913-1993) in Dubna, he received the Humboldt Research Award in 1999 and the Bruno Pontecorvo prize in 2002.