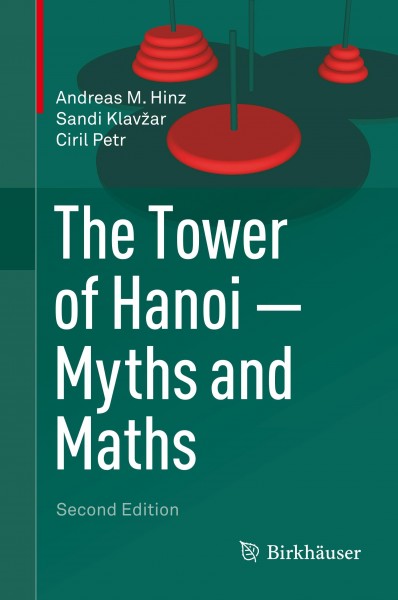 The Tower of Hanoi - Myths and Maths

The Tower of Hanoi - Myths and Maths

The solitaire game "The Tower of Hanoi" was invented in the 19th century by the French number theorist Édouard Lucas. The book presents its mathematical theory and offers a survey of the historical development from predecessors up to recent research. In addition to long-standing myths, it provides a detailed overview of the essential mathematical facts with complete proofs, and also includes unpublished material, e.g., on some captivating integer sequences. The main objects of research today are the so-called Hanoi graphs and the related Sierpinski graphs. Acknowledging the great popularity of the topic in computer science, algorithms, together with their correctness proofs, form an essential part of the book. In view of the most important practical applications, namely in physics, network theory and cognitive (neuro)psychology, the book also addresses other structures related to the Tower of Hanoi and its variants.The updated second edition includes, for the first time in English, the breakthrough reached with the solution of the "The Reve's Puzzle" in 2014. This is a special case of the famed Frame-Stewart conjecture which is still open after more than 75 years. Enriched with elaborate illustrations, connections to other puzzles and challenges for the reader in the form of (solved) exercises as well as problems for further exploration, this book is enjoyable reading for students, educators, game enthusiasts and researchers alike.Excerpts from reviews of the first edition: "The book is an unusual, but very welcome, form of mathematical writing: recreational mathematics taken seriously and serious mathematics treated historically. I don't hesitate to recommend this book to students, professional research mathematicians, teachers, and to readers of popular mathematics who enjoy more technical expository detail."Chris Sangwin, The Mathematical Intelligencer 37(4) (2015) 87f. "The book demonstrates that the Tower of Hanoi has a very rich mathematical structure, and as soon as we tweak the parameters we surprisingly quickly find ourselves in the realm of open problems."László Kozma, ACM SIGACT News 45(3) (2014) 34ff. "Each time I open the book I discover a renewed interest in the Tower of Hanoi. I am sure that this will be the case for all readers."Jean-Paul Allouche, Newsletter of the European Mathematical Society 93 (2014) 56. von Hinz, Andreas M. und Klavzar, Sandi und Petr, Ciril