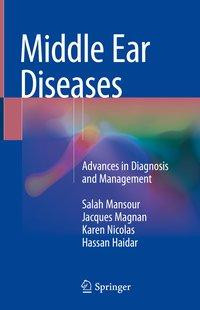 This book covers the latest advances in disciplines related to the middle ear pathologies such as: the innovations in the understanding of its functional anatomy and their implications along with the breakthroughs in the physiopathology of its diseases and the most recent concepts of their pathogenesis.More adapted audiological investigative methods and the advanced imaging approaches for an accurate diagnostic work up and the best management of middle ear ailments are presented . As an up-to-date learning resource, based on demonstrated clinico-radiological correlations, this book is a highly valuable teaching tool, especially when contemplating proceeding in middle ear surgery. Middle Ear Diseases is a comprehensive work, aimed for trainees, board candidates and teachers in otolaryngology and otology to respond to every educational need in regard to the most common middle ear pathologies. It is also a useful update for more experienced professionals in this field, as well as radiologists, audiologists and speech therapists. von Mansour, Salah

Salah Mansour MD, FRCSC obtained his medical degree from St-Joseph University in 1970, and gained his Licence of Medical Council of Canada in 1972. He trained for his specialization in Otolaryngology-Head and Neck Surgery at McGill University and Montreal University, Montreal, Canada between 1970-1975, and became a Fellow of the Royal College of Canada in 1975. He also obtained his Specialty Diploma ORL,HNS from Quebec College of surgeons and Specialty Diploma ORL-HNS from the Royal College of Canada in 1975. He became Professor of Otolaryngology-Head and Neck Surgery at the Faculty of Medicine at the Lebanese University in 1989. He was President of the examination commission, Arab Board of Otolaryngology from 1989-2003, and President of the Arab Board of Otolaryngology-Head and Neck Surgery from 2003-2013. He was Vice Dean of the Faculty of Medicine, Lebanese University from 1998-2012 . He is currently at the Faculty Medicine, Lebanese University, Sacré-Coeur Hospital, and Trad Hospital, and also has his own clinic. Prof Jacques Magnan, born in 1946, is affiliated with Hôpital NORD, Marseille, France and Aix-Marseille University, France. He completed his Otolaryngology residency at Clinique CAUSSE, France in 1974, before gaining further qualifications in maxillofacial surgery and otoneurology in 1976 and 1989, respectively. He became Professor and Head of Department 1989, Director of Otologic, Neurotologic and Microendoscopic laboratory 1996 and Professor emeritus in 2010. Karen Nicolas is married with five children, and since 2007 she has been Head of the Department of Radiology, MEIH, Bsalim, Mont Liban, Lebanon. She gained her medical degree at the University of Münster, Germany, where she also obtained her Radiology Diploma in 1997. She then worked in the Centre Hospitalier Tourcoing, France before gaining her Diplôme interuniversitaire (DIU) d'Imagerie ORL et cervico-faciale at the University Bicêtre, Paris. She then moved to Lebanon, working first as a radiologist at RIZK Hospital, Beirut and then at the Middle East Institute of Health, MEIH, Bsalim, Mont Liban. Hassan Haidar Ahmad is Lebanese and gained his medical degree at the Lebanese University in 2006. He trained for his Diploma of Microscopic and Endoscopic Surgery of the Base of Skull at Aix-Marseille University, Marseille, France from 2009 to 2011 and also received his Diploma of specialization in Otolaryngology from the Lebanese University in 2011. In 2013 he obtained his Diploma of advanced specialization in Otolaryngology (DFMS/AFS) from Aix-Marseille University, Marseille, France and also completed his Sub-specialization Fellowship (Otology - Neurotology) at Nord University Central Hospital, APHM, Marseille, France. He is currently Consultant in ENT, Head and Neck Surgery at Hamad Medical Corporation in Qatar and Assistant Professor of Clinical Otolaryngology at the Medical College of Weill Cornell University. He is also the program director of the Otology fellowship program at Hamad Medical Corporation in Qatar.