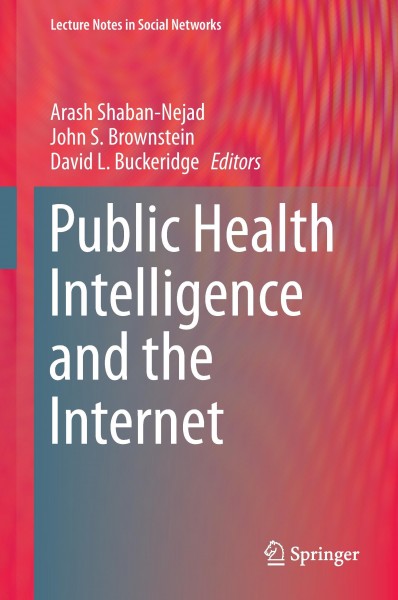 Public Health Intelligence and the Internet

Public Health Intelligence and the Internet

This book aims to highlight the latest achievements in epidemiological surveillance and internet interventions based on monitoring online communications and interactions on the web. It presents the state of the art and the advances in the field of online disease surveillance and intervention. The edited volume contains extended and revised versions of selected papers presented at the International World Wide Web and Population Health Intelligence (W3PHI) workshop series along with some invited chapters and presents an overview of the issues, challenges, and potentials in the field, along with the new research results. The book provides information for a wide range of scientists, researchers, graduate students, industry professionals, national and international public health agencies, and NGOs interested in the theory and practice of computational models of web-based public health intelligence. von Shaban-Nejad, Arash und Brownstein, John S. und Buckeridge, David L.

Dr. Arash Shaban-Nejad, MS, PhD, MPH Arash Shaban-Nejad is an Assistant Professor in the OAK-Ridge National Lab (ORNL) Center for Biomedical Informatics at the Department of Pediatrics, the University of Tennessee Health Science Center (UTHSC). Before coming to UTHSC, he was a Postdoctoral Fellow of the McGill Clinical and Health Informatics Group at McGill University, where he was conducting research on knowledge modeling/management and informed decision making for several applications in the domains of biomedical and health informatics. He received his Ph.D. and MSc in Computer Science from Concordia University, Montreal and MPH from the University of California, Berkeley. Additional training was accrued at the Harvard School of Public Health. His primary research interest is Population Health Intelligence, Epidemiologic Surveillance and Big-Data Semantic Analytics through the use of tools and techniques from Artificial Intelligence, Knowledge Representation, and Semantic Web. Dr. Shaban-Nejad is also the principal investigator in a global health and development research project for malaria elimination, funded by Bill & Melinda Gates Foundation, and an associate editor of BMC Medical Informatics and Decision Making.Dr. John Brownstein, PhD John Brownstein is an Associate Professor at the Harvard Medical School, USA and directs the Computational Epidemiology Group at the Children's Hospital Informatics Program in Boston. He was trained as an epidemiologist at Yale University, USA. Overall, his research agenda focuses on the surveillance, control, and prevention of disease. He has been at the forefront of the development and application of public health surveillance including HealthMap.org, an Internet based global infectious disease intelligence system. The system is currently used by over a million people a year including the CDC, WHO, DHS, DOD, HHS, and EU, and has been recognized by the National Library of Congress and the Smithsonian. Dr. Brownstein has advised the World Health Organization, Institute of Medicine, the US Department of Health and Human Services, and the White House on real-time public health surveillance. He plays a leading role in a number of international committees including as a Board Member of the International Society for Disease Surveillance. He was recently awarded the Presidential Early Career Award for Scientists and Engineers, the highest honor bestowed by the United States government on outstanding scientists and engineers. He has authored over a hundred peer-reviewed articles on epidemiology and public health, and his work has been reported on widely, including pieces in the New England Journal of Medicine, Science, Nature, New York Times, The Wall Street Journal, CNN, National PublicDr. David L. Buckeridge, MD, PhD David L. Buckeridge is an Associate Professor of Epidemiology and Biostatistics at McGill University in Montreal, Canada, where he holds a Canada Institutes of Health Research Chair (CRC) in applied public health. He is also a Medical Consultant to the Institut national de santé publique du Québec and the Direction de santé publique de Montreal. He received his MD degree in Community Medicine from Queen's University, Canada, his M.Sc. in Epidemiology from the University of Toronto, Canada, and his PhD in Biomedical Informatics from Stanford University, USA. He is a fellow of the Royal College of Physicians and Surgeons of Canada with specialty training in Public Health and Preventive Medicine. Dr. Buckeridge provides advice on surveillance to groups such as the World Health Organization (WHO), the Institute of Medicine, and the U.S. and Chinese Centers for Disease Control and Prevention. He conducts research on the informatics of public health surveillance. In particular, he is interested in the development and evaluation of methods for surveillance systems that use clinical and administrative data. His previous and ongoing works include the development of statistical methods for outbreak detection and the use of simulation modeling.