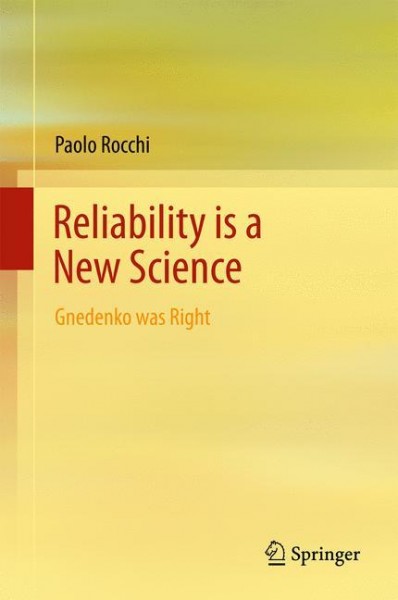 Reliability is a New Science

Reliability is a New Science
Gnedenko was right

This work illustrates research conducted over a ten-year timespan and addresses a fundamental issue in reliability theory. This still appears to be an empirically disorganized field and the book suggests employing a deductive base in order to evolve reliability as a science. The study is in line with the fundamental work by Gnedenko.Boris Vladimirovich Gnedenko (1912 - 1995) was a Soviet mathematician who made significant contributions in various scientific areas. His name is especially associated with studies of dependability, for which he is often recognized as the 'father' of reliability theory. In the last few decades, this area has expanded in new directions such as safety, security, risk analysis and other fields, yet the book 'Mathematical Methods in Reliability Theory' written by Gnedenko with Alexander Soloviev and Yuri Bélyaev still towers as a pillar of the reliability sector's configuration and identity.The present book proceeds in the direction opened by the cultural project of the Russian authors; in particular it identifies different trends in the hazard rate functions by means of deductive logic and demonstrations. Further, it arrives at multiple results by means of the entropy function, an original mathematical tool in the reliability domain. As such, it will greatly benefit all specialists in the field who are interested in unconventional solutions. von Rocchi, Paolo

Prof. Paolo Rocchi has been recognized as an Emeritus Docent at IBM for his achievements, and is also an Adjunct Professor at Luiss University of Rome. He is still active in various areas of research, including information theory, probability theory, computer science education, and software engineering. Rocchi is no stranger to groundbreaking proposals, having authored over one hundred and thirty works including a dozen volumes.