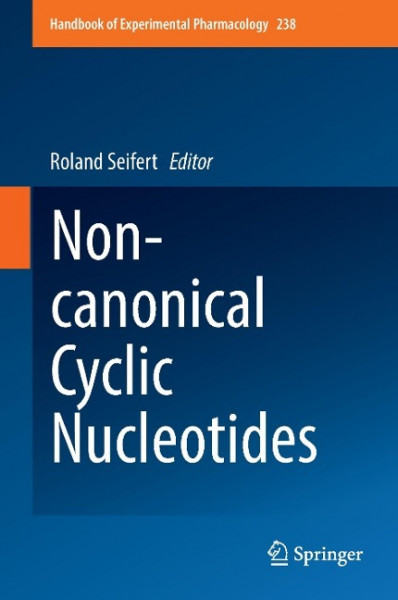 The cyclic purine nucleotides 3',5'-cAMP and 3',5'-cGMP are well-established second messengers. cGMP has recently been covered in a volume of the Handbook of Experimental Pharmacology (volume 191). In addition to 3',5'-cAMP and 3',5'-cGMP, so-called non-canonical cyclic nucleotides exist. These comprise the cyclic pyrimidine nucleotides 3',5'-cCMP and 3',5'-cUMP, the purine nucleotide 3',5'-cIMP, the 2',3'-nucleoside monophosphates and cyclic dinucleotides. In this volume of the Handbook of Pharmacology, word-leading experts in the field summarize our current knowledge on these non-canonical cyclic nucleotides, discuss open questions, future research directions and the pharmacotherapeutic implications. Special emphasis will be given to the emerging roles of 3',5'-cCMP and 3',5'-cUMP as second messengers with regard to generators, effectors, biological functions, inactivation and bacterial toxins. The role of 3',5'-cIMP as potential second messenger will also be critically discussed. Furthermore, we will consider transport of cyclic nucleotides and their potential role as first messengers. The role of the cyclic dinucleotide cGAMP in the immune system will covered, too. Lastly, the book will present important methodological aspects ranging from mass-spectrometric methods for cyclic nucleotide detection to the synthesis of nucleotide analogs as experimental tools and holistic methods for analysis of cyclic nucleotide effects. von Seifert, Roland