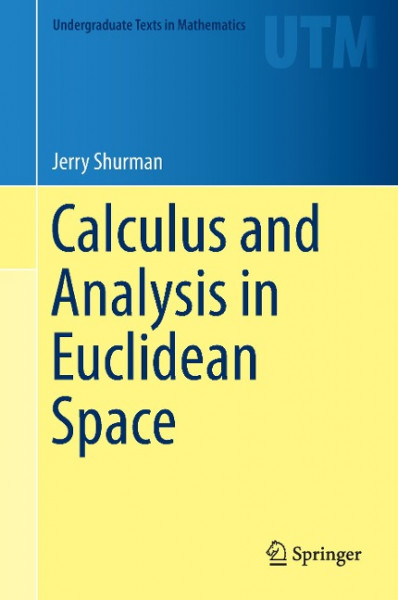 Calculus and Analysis in Euclidean Space

Calculus and Analysis in Euclidean Space
A First Course

The graceful role of analysis in underpinning calculus is often lost to their separation in the curriculum. This book entwines the two subjects, providing a conceptual approach to multivariable calculus closely supported by the structure and reasoning of analysis. The setting is Euclidean space, with the material on differentiation culminating in the inverse and implicit function theorems, and the material on integration culminating in the general fundamental theorem of integral calculus. More in-depth than most calculus books but less technical than a typical analysis introduction, Calculus and Analysis in Euclidean Space offers a rich blend of content to students outside the traditional mathematics major, while also providing transitional preparation for those who will continue on in the subject.The writing in this book aims to convey the intent of ideas early in discussion. The narrative proceeds through figures, formulas, and text, guiding the reader to do mathematics resourcefully by marshaling the skills of geometric intuition (the visual cortex being quickly instinctive) algebraic manipulation (symbol-patterns being precise and robust) incisive use of natural language (slogans that encapsulate central ideas enabling a large-scale grasp of the subject). Thinking in these ways renders mathematics coherent, inevitable, and fluid.The prerequisite is single-variable calculus, including familiarity with the foundational theorems and some experience with proofs. von Shurman, Jerry

Jerry Shurman is professor of mathematics at Reed College, Portland, OR, USA. He is also the co-author of GTM 228 "A First Course in Modular Forms."