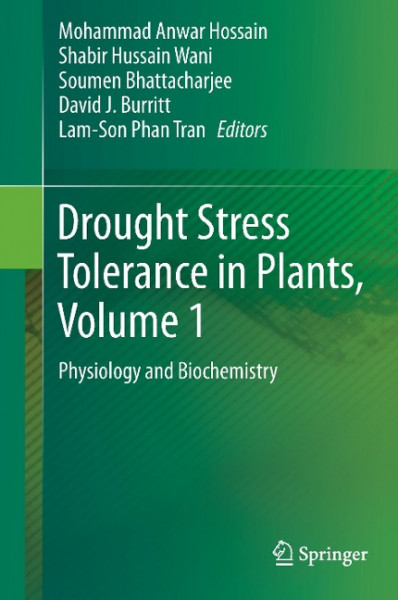 Abiotic stress adversely affects crop production worldwide, decreasing average yields for most of the crops to 50%. Among various abiotic stresses affecting agricultural production, drought stress is considered to be the main source of yield reduction around the globe. Due to an increasing world population, drought stress will lead to a serious food shortage by 2050. The situation may become worse due to predicated global climate change that may multiply the frequency and duration and severity of such abiotic stresses. Hence, there is an urgent need to improve our understanding on complex mechanisms of drought stress tolerance and to develop modern varieties that are more resilient to drought stress. Identification of the potential novel genes responsible for drought tolerance in crop plants will contribute to understanding the molecular mechanism of crop responses to drought stress. The discovery of novel genes, the analysis of their expression patterns in response to drought stress, and the determination of their potential functions in drought stress adaptation will provide the basis of effective engineering strategies to enhance crop drought stress tolerance. Although the in-depth water stress tolerance mechanisms is still unclear, it can be to some extent explained on the basis of ion homeostasis mediated by stress adaptation effectors, toxic radical scavenging, osmolyte biosynthesis, water transport, and long distance signaling response coordination. Importantly, complete elucidation of the physiological, biochemical, and molecular mechanisms for drought stress, perception, transduction, and tolerance is still a challenge to the plant biologists. The findings presented in volume 1 call attention to the physiological and biochemical modalities of drought stress that influence crop productivity, whereas volume 2 summarizes our current understanding on the molecular and genetic mechanisms of drought stress resistance in plants. von Mohammad Anwar, Hossain und Wani, Shabir Hussain und Bhattacharjee, Soumen und Burritt, David J und Tran, Lam-Son Pha

Dr. Mohammad Anwar Hossain is a professor in the Department of Genetics and Plant Breeding, Bangladesh Agricultural University, Mymensingh-2202, Bangladesh. He received his B.Sc. in agriculture and M.S. in genetics and plant breeding from Bangladesh Agricultural University, Bangladesh. He also received an M.Sc. in agriculture from Kagawa University, Japan, in 2008 and a Ph.D. in abiotic stress physiology and molecular biology from Ehime University, Japan, in 2011. In November 2015 he moved to Tokyo University, Japan, as a postdoctoral scientist to work on isolating low phosphorus stress tolerant genes/QTLs from rice. He has published 25 research articles, 15 book chapters, and 5 review articles on important aspects of plant physiology and breeding, plant stress responses and tolerance mechanisms, and exogenous chemical priming-induced abiotic stress tolerance. Recently, he edited a book entitled Managing Salt Tolerance in Plants: Molecular and Genomic Perspectives published by CRC press, Taylor and Francis Group, USA. He has attended several international and national conferences for presenting his research findings. He is a professional member of the Bangladesh Society of Genetics and Plant Breeding, Bangladesh Association for Plant Tissue Culture and Biotechnology, and the Seed Science Society of Bangladesh.Dr. Shabir Hussain Wani is an assistant professor in the Department of Genetics and Plant Breeding, Sher-e-Kashmir University of Agricultural Sciences and Technology of Kashmir, Srinagar, Jammu and Kashmir, India. He received his B.Sc. in agriculture from BhimRao Agricultural University Agra, India, and M.Sc. in genetics and plant breeding from Central Agricultural University, Manipur, India, and Ph.D. in plant breeding and genetics on "transgenic rice for abiotic stress tolerance" from the Punjab Agricultural University Ludhiana, India. After obtaining his Ph.D. he worked as research associate in the Biotechnology Laboratory, Central Institute of Temperate Horticulture (ICAR), Rangreth, Srinagar, India, for 2 years, up to October 2011. In November 2011 he joined the Krishi Vigyan Kendra (Farm Science Centre) as program coordinator (i/c) at Senapati, Manipur, India. He teaches courses related to plant breeding, seed science and technology, and stress breeding and has published more than 80 papers/chapters in journals and books of international and national repute. He has also edited several books on current topics in crop improvement including Managing Salt Tolerance in Plants: Molecular and Genomic Perspectives published by CRC press, Taylor and Francis Group, USA, in 2015. His Ph.D. research won first prize in the North Zone Competition, at national level, in India. He was awarded a Young Scientist Award from the Society for Promotion of Plant Sciences, Jaipur, India, in 2009. He is a fellow of the Society for Plant Research, India. Recently he also received Young Scientist Award (Agriculture) 2015 from Society for Plant Research, Meerut, India. He has been selected for one year University Grants Commission funded RAMAN fellowship for Post Doc Research in Michigan State University USA for the year 2016-17. He has attended several international and national conferences, presenting his research.Dr. Soumen Bhattacharjee is presently head of UGC Centre for Advanced Studies, Department of Botany, the University of Burdwan, West Bengal. He completed his master's in botany and Ph.D. on the abiotic stress physiology of plants at the University of Burdwan, West Bengal, India. Later, he started his teaching career as a faculty member in the Department of Botany in Delhi University Constituent College. After serving almost two and a half years, he joined the West Bengal Education Service and worked mainly in the Post Graduate Department of Botany, Hooghly Mohsin College, West Bengal, as lecturer, reader, and associate professor. In 2007, Dr. Bhattacharjee was selected by the Indian Council of Agricultural Research (ICAR) as a senior scientist and joined the Vivekananda Institute of Hill Agriculture, Almora, India. In 2013 he joined the University of Burdwan as associate professor. His research interests center around plant redox biology, particularly understanding the relationship between oxidative stress and plant growth, and the role of ROS signaling in stress acclimation, characterization of redox-regulatory mechanisms during germination of rice under abiotic stress, and understanding the physiological basis of antioxidant accumulation in underutilized medicinal plants. He has published 34 research papers in international peer-reviewed journals, 12 review articles in various national and international journals, and 14 book chapters and has 6 edited books and journal volumes. He is also a member of several professional research bodies and is a guest editor and reviewer for several international peer-reviewed journals. Dr. David J. Burritt is an associate professor in the Department of Botany, the University of Otago, Dunedin, New Zealand. He received his B.Sc. and M.Sc. (Hons.) in botany and his Ph.D. in plant biotechnology from the University of Canterbury, Christchurch, New Zealand. His research interests include oxidative stress and redox biology, plant-based foods and bioactive molecules, plant breeding and biotechnology, cryopreservation of germplasm, and the stress biology of plants, animals, and algae. He has over 90 peer-reviewed publications.plants under stress. In August 2007, he moved to the University of Missouri-Columbia, USA, as a senior research scientist to coordinate a research team working to discover soybean genes to be used for genetic engineering of drought-tolerant soybean plants. His current research interests are elucidation of the roles of phytohormones and their interactions in abiotic stress responses, as well as translational genomics of legume crops with the aim to enhance crop productivity under adverse environmental conditions. He has published over 90 peer-reviewed papers with more than 70 research and 20 review articles, contributed 7 book chapters to various book editions published by Springer, Wiley-Blackwell, American Society of Agronomy, Crop Science Society of America, and Soil Science Society of America. He has also edited 5 book volumes for Springer, including this one.