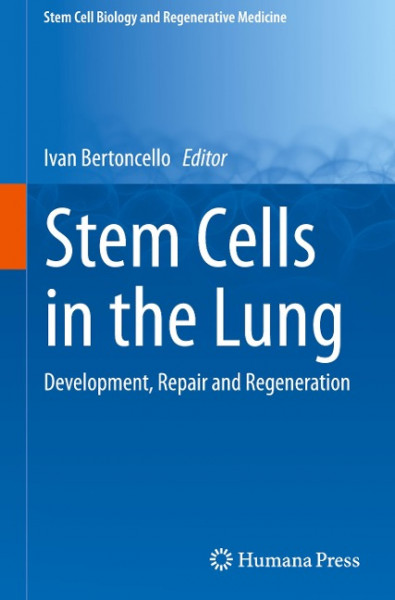 Stem Cells in the Lung

Stem Cells in the Lung
Development, Repair and Regeneration

This book presents a comprehensive overview of the current understanding of the organization of endogenous lung stem and progenitor cell compartments during fetal lung development, postnatal lung growth and in adulthood. Progressing stage by stage, the chapters on fetal lung development emphasize the integrated role of epithelial, stromal, vascular and neural cell elements in building a functional lung, while the subsequent chapters on adult lung regeneration describe the nature and properties of adult lung stem/progenitor cells distributed along the proximal-distal axis of the airway tree. The chapters on regulation of lung regeneration and repair discuss how regenerative cells interact with their niche microenvironment and how regulation of lung regeneration and repair in the steady state and following injury recapitulates ontogeny. And, lastly, the chapters on cellular therapies for lung disease and bioengineering the lung focus on promising emerging therapies and approaches in lung regenerative medicine. The scope of this volume of the Stem Cell Biology and Regenerative Medicine series focuses on exploring the topic of building and rebuilding the lung from a cellular rather than a molecular perspective. Thus, the section on cellular therapies does not include extensive coverage of each of the numerous lung diseases, including cancer, which could be amenable to stem cell-based therapies, although the final chapter does include some discussion on the future prospects and challenges. All of the contributors are working on the cutting edge of the lung stem cell field, making this book essential reading for those with an interest in the field of lung stem cell biology and the potential role of cellular therapies and tissue bioengineering approaches in lung regenerative medicine, including biomedical scientists, graduate students, post-graduate researchers and respiratory clinicians. von Bertoncello, Ivan

Ivan Bertoncello, MSc, PhD is an Honorary Principle Research Fellow and Associate Professor in the Department of Pharmacology and Therapeutics; and a member of the executive of the Lung Health Research Centre, at the University of Melbourne, Victoria, Australia. He has previously held appointments as Head of the Adult Lung Stem Cell Laboratory at the Australian Stem Cell Centre at Monash University; and Head of the Lung Regeneration Laboratory in the Department of Pharmacology and Therapeutics at the University of Melbourne. His international reputation in stem cell research was originally built on pioneering studies analysing the organisation and regulation of bone marrow stem and progenitor cells. His laboratory employed similar methods to analyse endogenous adult lung stem and progenitor cells in order to understand how regenerative cells in the adult lung are organised, and how they can be harnessed to treat lung disease or repair the injured lung.