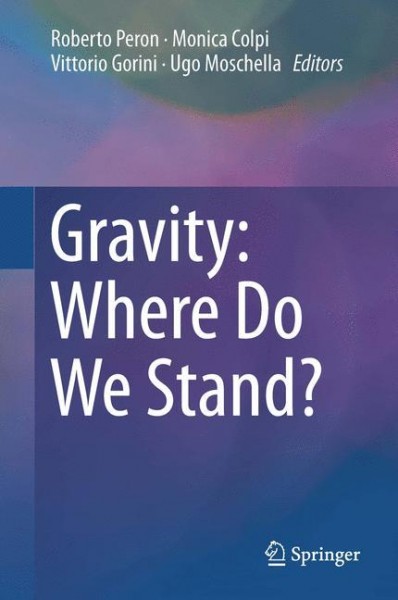 Gravity: Where Do We Stand?

Gravity: Where Do We Stand?

This book presents an overview of the current understanding of gravitation, with a focus on the current efforts to test its theory, especially general relativity. It shows how the quest for a deeper theory, which would possibly incorporate gravity in the quantum realm, is more than ever an open field.The majority of the contributions deals with the manifold facets of "experimental gravitation", but the book goes beyond this and covers a broad range of subjects from the foundations of gravitational theories to astrophysics and cosmology. The book is divided into three parts. The first part deals with foundations and Solar System tests. An introductory pedagogical chapter reviews first Newtonian gravitational theory, special relativity, the equivalence principle and the basics of general relativity. Then it focuses on approximation methods, mainly the post-Newtonian formalism and the relaxed Einstein equations, with a discussion on how they are used in treating experimental tests and in the problem of generation and detection of gravitational waves. Following this is a set of chapters describing the most recent experiments, techniques and observations on the testing   of gravity theories in the laboratory, around the Earth and in the Solar System.The second part is dedicated to astrophysical topics deeply linked with the study of gravitation, namely binary pulsars and the perspective of direct detection of gravitational waves. These cases are paradigmatic in that the gravitational signals act at the same time as messengers helping us to understand the properties of important and wide classes of astrophysical objects. The third part explores the many open issues in current knowledge of gravitation machinery, especially related to astrophysical and cosmological problems and the way possible solutions to them impact the quest for a quantum theory of gravitation and unified theory. Included is a selection of the many possible paths, giving a hint to the subtleties one is called upon. Whenever possible, a close link to observational constraints and possible experimental tests is provided. In selecting the topics of the various contributions, particular care has been devoted to ensure their fit in a coherent representation of our understanding of gravitational phenomena. The book is aimed at graduate level students and will form a valuable reference for those working in the field.   von Peron, Roberto und Colpi, Monica und Gorini, Vittorio und Moschella, Ugo