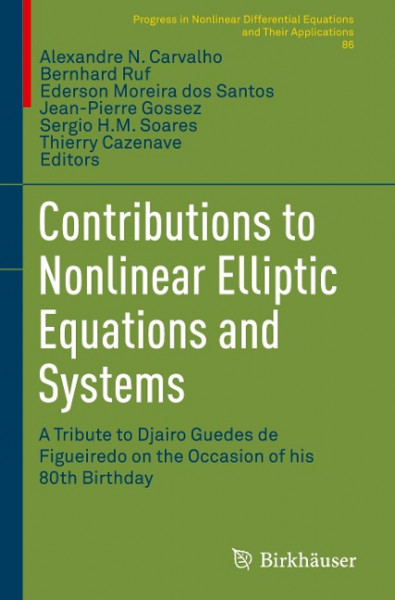 This volume of contributions pays tribute to the life and work of Djairo Guedes de Figueiredo on the occasion of his 80th birthday. The articles it contains were born out of the ICMC Summer Meeting on Differential Equations - 2014 Chapter, also dedicated to de Figueiredo and held at the Universidade de São Paulo at São Carlos, Brazil from February 3-7, 2014. The contributing authors represent a group of international experts in the field and discuss recent trends and new directions in nonlinear elliptic partial differential equations and systems.Djairo Guedes de Figueiredo has had a very active scientific career, publishing 29 monographs and over one hundred research articles. His influence on Brazilian mathematics has made him one of the pillars of the subject in that country. He had a major impact on the development of analysis, especially in its application to nonlinear elliptic partial differential equations and systems throughout the entire world. The articles collected here pay tribute to him and his legacy and are intended for graduate students and researchers in mathematics and related areas who are interested in nonlinear elliptic partial differential equations and systems. von Nolasco de Carvalho, Alexandre und Ruf, Bernhard und Moreira dos Santos, Ederson und Gossez, Jean-Pierre und Monari Soares, Sergio Henrique und Cazenave, Thierry