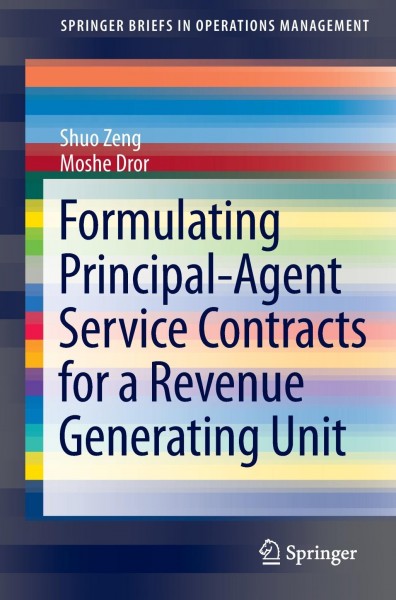 This book examines contractual options for a performance based contract between an owner of a revenue generating unit and a repair agent for such unit. The framework of the analysis is that of economists' principal-agent problem. The contractual options of a principal and an agent are modeled as a Markov process with an undetermined time horizon. For a risk neutral principal, the authors identify the conditions under which a principal contracts with a risk-neutral, risk-averse, or risk-seeking agent and derive the principal's optimal offer together with the agent's optimal service capacity response. In essence, the book provides an extensive formulating analysis of principal-agent contracts given any exogenous parameter values. Ultimately a small number of formulas cover a large spectrum of principal-agent conditions. von Zeng, Shuo und Dror, Moshe

Shuo Zeng received the B.E. degree in Automation in 2004 and the M.E. degree in Computer Science in 2007 from Tsinghua University, China. He is currently a doctoral student in the Management Information Systems Department at the University of Arizona. His research interests include principal-agent contract design and the application of game theory in operations management.Moshe Dror was born in Kazan, Russia, spent his early childhood in Poland, and grew up in Israel. His professional education has been completed in the U.S.A. He is married to Dr. Malcah Yaeger-Dror. Dr. Moshe Dror has received an M.Sc. degree in Mathematical Methods and an I.E. degree -- both from Columbia University. He also received a Ph.D. in Management Science from University of Maryland. He has conducted well-documented research on a variety of topics in logistics, scheduling, manufacturing, cooperative game theory/cost allocation, and on applications of agent theory in project management. He has published numerous book chapters and over 100 papers in the primary refereed journals which focus on management of operations -- Management Science, Operations Research, Naval Research Logistics, IIE Transactions, Transportation Science, among others. He has also published in a number of mathematical and computer science journals such as SIAM J. on Discrete Mathematics, J. of Complexity, ORDER, IPL, Discrete Mathematics, Discrete Applied Mathematics, Discrete Optimization, International Journal of Computational Geometry & Applications, J. of Applied Probability, in addition to publications in a major economics journals I.J. of Game Theory and Games & Economic Behavior. He has edited a book on ARC ROUTING: Theory, Solutions, and Applications (2000), and co-edited a book MODELING UNCERTAINTY: An Examination of Stochastic Theory, Methods, and Applications (2002). He has also edited 3 special issues of journals (Operations Research, EJOR, and IIE Transactions). In Summer 2010 he organized and co-chaired an NSF and AFOSR/RSL supported conference on Behavioral & Quantitative Game Theory Workshop on Future Directions, Newport Beach, California.