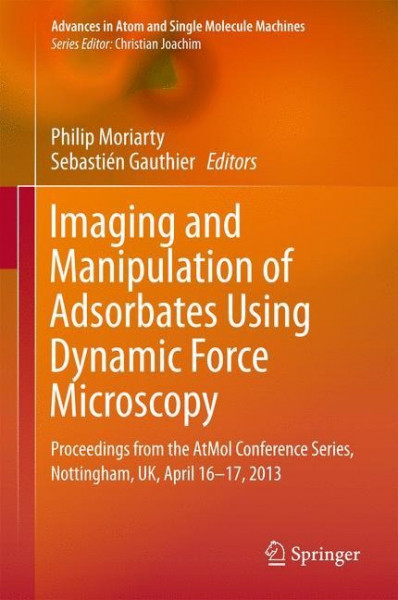 Imaging and Manipulation of Adsorbates using Dynamic Force Microscopy provides an overview of the latest developments in dynamic force microscopy (DFM) of atoms, molecules, and nanoparticles adsorbed on solid surfaces. Significant advances in the capabilities of this technique have been made in the last decade and this book represents a timely snapshot of the major research themes in the field, with a particular focus on the manipulation of matter at the atomic and (sub)molecular levels. This edited volume will be of keen interest to researchers active in nanoscience and its various sub-fields including, in particular, scanning probe microscopy.  This book expands on the previous volumes in the series Advances in Atom and Single Molecule Machines. DFM is an exceptionally powerful tool for the imaging and probing of adsorbates on insulators and is now a component of the type of multiprobe interconnection systems described in Vol. 1 of the series. DFM can also be used to translate atoms and molecules in the context of the fabrication of the type of logic gates described in Vol. 2. When used in conjunction with STM, DFM also enables a detailed comparison of the chemical 'architecture' of a molecule with the spatial distribution of its orbital density, as described in Vol. 3. In this book readers will gain key insights into the current capabilities, and future potential, of dynamic force microscopy. von Moriarty, Philip und Gauthier, Sebastie

Philip Moriarty is a Professor of Physics and an Engineering & Physical Sciences Research Council (EPSRC) Fellow in the School of Physics and Astronomy, University of Nottingham. His research interests span a number of topical themes in nanometre scale science with a particular recent focus on single atom/molecule imaging and manipulation using dynamic force microscopy. In addition to his coordination of a number of nanoscience-focussed European networks (including, most recently, ACRITAS(Actuation and Characterisation at the Single Bond Limit)), he was Chair of the Institute of Physics Nanoscale Physics and Technology Group from 2009 - 2012, is currently a member of the Science Board of the UK Institute of Physics, and was a member of the EPSRC Strategic Advisory Team for Physics from 2005 - 2006. Moriarty has a keen interest in outreach activities and both science and higher education funding policy. In addition to participating in a number of research council-funded public engagement projects (including Giants of the Infinitesimal), and his membership of the Steering Committee of the Council for the Defence of British Universities, he has interacted with national and international media (including The Independent, The Guardian, Times Higher Education, BBC Radio 4, Die Zeit, and The Economist) on these issues. He is also a regular contributor to Nottingham's Sixty Symbols YouTube project which has, as of June 2013, attracted a little over 20 million views (across ~ 200 videos). Although he does not share his infamous namesake's fascination with the binomial theorem, in his spare time Moriarty enjoys exploring the relationships between mathematics/physics and music. Sébastien GAUTHIER is "directeur de recherche" au Centre d'élaboration de matériaux et d'études structurales (CEMES) in Toulouse (France). He joined the "Groupe de Physique des Solides de l'Ecole Normale Supérieure" (Paris) in 1981 to study inelastic electron tunneling spectroscopy in metal-insulator-metal junctions. He is working in the scanning tunnelling microscopy (STM) field since 1986. He built several UHV-STM to study metal-on-metal crystalline growth. He moved to Toulouse, in CEMES, in 1997 to develop STM experiments on single adsorbed molecules on metallic surfaces. He is involved in non-contact Atomic Force microscopy (nc-AFM) since 2002, for studying single molecules adsorbed on insulating surfaces, with a special interest in charge manipulation on this type of systems.