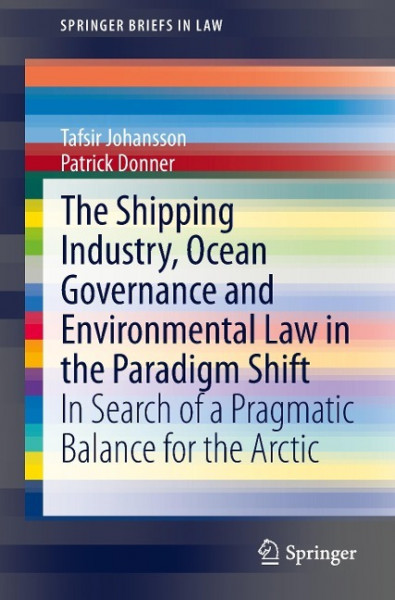 The Shipping Industry, Ocean Governance and Environmental Law in the Paradigm Shift

The Shipping Industry, Ocean Governance and Environmental Law in the Paradigm Shift
In Search of a Pragmatic Balance for the Arctic

This book examines the corpus of status quo environmental legal regime, geographical issues and redundant "stakeholder claims," which persist in the Arctic. It examines multifarious theories relating not only to conflicting and opposing interests, but also to parties to whom the shipping industry should be accountable. The unique aspect of this book is the Corporate Social responsibility analysis pertaining to the Arctic and alternatives that strike a balance between the increased commercialization of the shipping industry and the laws and concepts of ocean governance. The book relevantly puts forward the concept of "ocean governance" and to what extent it can be addressed in terms of the Arctic. What distinguishes this book from others is the fact that it is not limited to examining the effects of climate change and how it is reshaping the way scholars assume the Arctic will be in the near future. Rather it creates a transparent nexus between opposing claims and increasing commercial interests and proceeds to scrutinize the efforts of the Arctic Council and individual Arctic coastal states. In this context, the book follows a given equation based on initial theories and how the opposing claims and increasing commercialization side of the equation can be balanced with the appropriate legal norm. It also reflects on the critical aspects of "hard law and soft law" which are two opposite ends of the legal pole and core elements of any legal spectrum. The book, after reflecting on those two elements, finally proposes a new Arctic legal regime, which is intricate and detailed and is basically a hierarchy based on logic and reasoning. In doing so, it imports a pristine theory for a pristine territory. von Johansson, Tafsir und Donner, Patrick

Tafsir JohanssonTafsir Johansson started his career as a civil lawyer of the Commonwealth and joined the World Maritime University (International Maritime Organization of the United Nations) as a research intern in 2013, working with the Environmental Research Group (MER) in its work on various projects as well as the preparatory works for the Arctic Shipping Conference i.e. 'Shiparc2014'. He simultaneously worked as a Research Assistant for the 'CSR Maritime' project that pertains to Corporate Social Responsibility and Maritime Governance. Mr. Johansson was employed as a full time Research Assistant at World Maritime University upon the successful completion of his internship. Mr. Johansson has been hired as a Maritime Lawyer for MSIIPA (Maritime Spill Incident Intervention Policies and Approaches) under Transport Canada (Government of Canada), Project Officer for PGMS (Good Governance of Multi-cultural Safety) under International Association of Maritime Universities (IAMU)and Project Manager for SAIL (Sustainable Approaches and Innovative Liaisons) under the North Sea Region programme. He is also a part time lecturer in the area of Maritime Law and Policy (MLP) at the World Maritime University. Mr. Johansson has co-authored several articles in peered reviewed Journals in diverse areas such as oil pollution in the North Sea, Shipwrecks and Corporate Social Responsibility in the maritime field. As of June 2014, Mr. Johansson commenced his Doctoral Studies in Maritime Affairs at the World Maritime University. Mr. Johansson obtained an all-distinction result in LL.M from the University of Lund in Sweden.   Associate Professor Patrick DonnerAssociate Professor Donner qualified for the bar in Finland (vicehäradshövding) in 1977 and served on the bench as deputy judge and acting chief judge of the City Court of Mariehamn for several years in the late 1970's. Professor Donner served the Sally Shipping group for 12 years, advancing from chief legal counsel and company secretary to deputy managing director with responsibility for the legal affairs of the group, which had ferry operations in Scandinavia and the United Kingdom and cruise operations in the Caribbean. After the Sally Group he was managing director for Delfin Cruises Ltd. in Finland, operating cruises in the Baltic, after which he ran his own law and management consultancy firm for a few years. During all this time he taught maritime law (part-time) at the Maritime Academy of Åland and also held numerous non-executive positions on boards of directors of shipping and insurance companies as well as elected public office at local level.Since January 1995 professor Donner has been at the World Maritime University in Malmö, Sweden, first as Associate Professor in Shipping Management and currently as Associate Academic Dean. He is also Head of the Maritime Law and Policy specialisation and during the second half of 2014 he is Acting Vice-President (Academic) of World Maritime University. He teaches international post-graduate students in all commercial aspects of shipping with an emphasis on maritime and commercial law. Professor Donner is an Associate Fellow of the Nautical Institute.