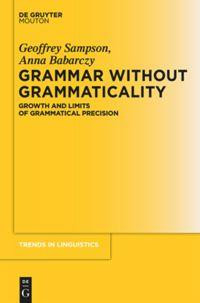 Grammar Without Grammaticality
Growth and Limits of Grammatical Precision

Linguists have standardly assumed that grammar is about identifying all and only the 'good' sentences of a language, which implies that there must be other, 'bad' sentences- but in practice most linguists know that it is hard to pin those down. The standard assumption is no more than an assumption. A century ago, grammarians did not think about their subject that way, and our book shows that the older idea was right: linguists can and should dispense with the concept 'starred sentence'. We draw on corpus data in order to support a different model of grammar, in which individuals refine positive grammatical habits to greater or lesser extents in diverse and unpredictable directions, but nothing is ever ruled out. Languages are not merely alternative methods of verbalizing universal logical forms. We use empirical evidence to shed light on the routes by which school-age children gradually expand their battery of grammatical resources, which turn out to be sometimes counter-intuitive. Our rejection of the 'starred sentence' concept has attracted considerable discussion, and we summarize the reactions and respond to our critics. The contrasting models of grammar described in this book entail contrasting pictures of human nature; our closing chapter shows that grammatical theory is not value-neutral but has an ethical dimension. von Babarczy, Anna und Sampson, Geoffrey