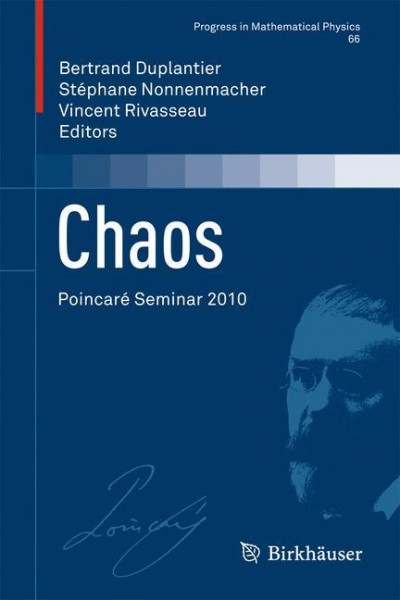 This twelfth volume in the Poincaré Seminar Series presents a complete and interdisciplinary perspective on the concept of Chaos, both in classical mechanics in its deterministic version, and in quantum mechanics. This book expounds some of the most wide ranging questions in science, from uncovering the fingerprints of classical chaotic dynamics in quantum systems, to predicting the fate of our own planetary system. Its seven articles are also highly pedagogical, as befits their origin in lectures to a broad scientific audience. Highlights include a complete description by the mathematician É. Ghys of the paradigmatic Lorenz attractor, and of the famed Lorenz butterfly effect as it is understood today, illuminating the fundamental mathematical issues at play with deterministic chaos; a detailed account by the experimentalist S. Fauve of the masterpiece experiment, the von Kármán Sodium or VKS experiment, which established in 2007 the spontaneous generation of a magnetic field in a strongly turbulent flow, including its reversal, a model of Earth's magnetic field; a simple toy model by the theorist U. Smilansky - the discrete Laplacian on finite d-regular expander graphs - which allows one to grasp the essential ingredients of quantum chaos, including its fundamental link to random matrix theory; a review by the mathematical physicists P. Bourgade and J.P. Keating, which illuminates the fascinating connection between the distribution of zeros of the Riemann ¿-function and the statistics of eigenvalues of random unitary matrices, which could ultimately provide a spectral interpretation for the zeros of the ¿-function, thus a proof of the celebrated Riemann Hypothesis itself; an article by a pioneer of experimental quantum chaos, H-J. Stöckmann, who shows in detail how experiments on the propagation of microwaves in 2D or 3D chaotic cavities beautifully verify theoretical predictions; a thorough presentation by the mathematical physicist S. Nonnenmacher of the "anatomy" of the eigenmodes of quantized chaotic systems, namely of their macroscopic localization properties, as ruled by the Quantum Ergodic theorem, and of the deep mathematical challenge posed by their fluctuations at the microscopic scale; a review, both historical and scientific, by the astronomer J. Laskar on the stability, hence the fate, of the chaotic Solar planetary system we live in, a subject where he made groundbreaking contributions, including the probabilistic estimate of possible planetary collisions. This book should be of broad general interest to both physicists and mathematicians. von Duplantier, Bertrand und Rivasseau, Vincent und Nonnenmacher, Stéphane