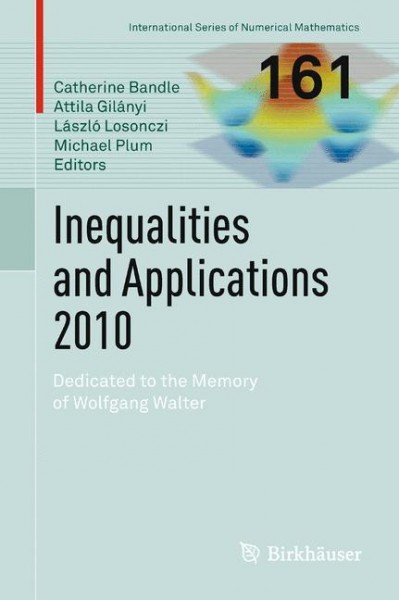 Inequalities and Applications 2010
Dedicated to the Memory of Wolfgang Walter

Inequalities arise as an essential component in various mathematical areas. Besides forming a highly important collection of tools, e.g. for proving analytic or stochastic theorems or for deriving error estimates in numerical mathematics, they constitute a challenging research field of their own. Inequalities also appear directly in mathematical models for applications in science, engineering, and economics.  This edited volume covers divers aspects of this fascinating field. It addresses classical inequalities related to means or to convexity as well as inequalities arising in the field of ordinary and partial differential equations, like Sobolev or Hardy-type inequalities, and inequalities occurring in geometrical contexts. Within the last five decades, the late Wolfgang Walter has made great contributions to the field of inequalities. His book on differential and integral inequalities was a real breakthrough in the 1970's and has generated a vast variety of further research in this field. He also organized six of the seven "General Inequalities" Conferences held at Oberwolfach between 1976 and 1995, and co-edited their proceedings. He participated as an honorary member of the Scientific Committee in the "General Inequalities 8" conference in Hungary. As a recognition of his great achievements, this volume is dedicated to Wolfgang Walter's memory. The "General Inequalities" meetings found their continuation in the "Conferences on Inequalities and Applications" which, so far, have been held twice in Hungary. This volume contains selected contributions of participants of the second conference which took place in Hajdúszoboszló in September 2010, as well as additional articles written upon invitation. These contributions reflect many theoretical and practical aspects in the field of inequalities, and will be useful for researchers and lecturers, as well as for students who want to familiarize themselves with the area. von Bandle, Catherine und Gilányi, Attila und Losonczi, László und Plum, Michael