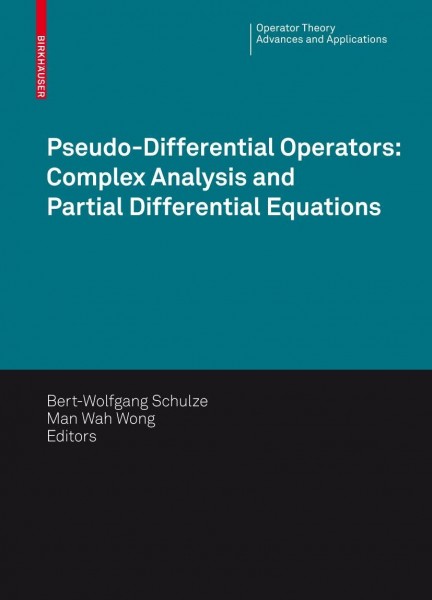 The International Workshop on Pseudo-Di?erential Operators: Complex Analysis and Partial Di?erential Equations was held at York University on August 4-8, 2008. The ?rst phase of the workshop on August 4-5 consisted of a mini-course on pseudo-di?erential operators and boundary value problems given by Professor Bert-Wolfgang Schulze of Universita ¿t Potsdam for graduate students and po- docs. This was followed on August 6-8 by a conference emphasizing boundary value problems;explicit formulas in complex analysis and partialdi?erential eq- tions; pseudo-di?erential operators and calculi; analysis on the Heisenberg group and sub-Riemannian geometry; and Fourier analysis with applications in ti- frequency analysis and imaging. The role of complex analysis in the development of pseudo-di?erential op- ators can best be seen in the context of the well-known Cauchy kernel and the related Poisson kernel in, respectively, the Cauchy integral formula and the Po- son integral formula in the complex plane C. These formulas are instrumental in solving boundary value problems for the Cauchy-Riemann operator? and the Laplacian?onspeci?cdomainswith theunit disk andits biholomorphiccomp- ion, i. e. , the upper half-plane, as paradigm models. The corresponding problems in several complex variables can be formulated in the context of the unit disk n n in C , which may be the unit polydisk or the unit ball in C . von Schulze, Bert-Wolfgang und Wong, M. W.