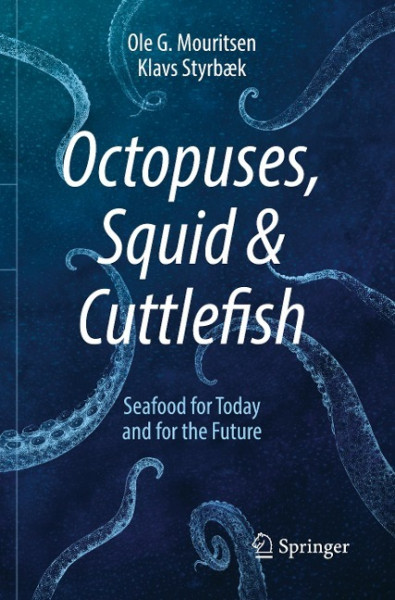 Octopuses, Squid & Cuttlefish
Seafood for Today and for the Future

Humans everywhere have always been fascinated by octopuses, squid, and cuttlefish, known biologically as cephalopods. They evolved hundreds of millions of years ago and are related to molluscs such as mussels and snails. They can grow to an enormous size with eyes as big as footballs, but they still live for only a couple of years. They mate once in their lifetime and die shortly after. They have blue blood and three hearts and they can shoot out jet-black ink. They have a brain and have behaviours that could be interpreted as signs of intelligence, even though more than half of their brain is distributed in their arms. They are colour blind, but they can change the colour of their skin in a flash. They are masters of disguise and are able to alter the texture of their skin and the patterns displayed on it at lighting speed. They can also ¿taste¿ using the suckers on their arms. They can move extremely fast thanks to a jet-propulsion system built into their body cavity. Although they are soft-bodied and look vulnerable, cephalopods are formidable predators. Octopuses have arms that are so strong that they can exert a force equal to hundreds of times their own body weight. Squid and cuttlefish can shoot out a tentacle to capture prey at the speed of a javelin thrown by an expert athlete. Cephalopods are, however, so much more than just fascinating creatures with strange physical characteristics. They are a nutritious, delicious protein source that has found a place for thousands of years in many food cultures around the world. As squid, cuttlefish, and octopuses are native to virtually all parts of the ocean, they are an excellent and available alternative to meat from terrestrial animals. This book is written to promote the overall place of cephalopods in home kitchens and to inspire the uninitiated to add them to their diet. It describes the many facets of their anatomy that play a central role in their potential use as healthy, diverse, and interesting food sources, with a particular emphasis on their taste and texture. By way of an assortment of recipes, the authors hope to dispel the myth that it is difficult to prepare delicious dishes using squid, cuttlefish, and octopuses. In addition, there are contributions to the on-going discussions about how marine resources can be exploited more responsibly in a sustainable manner. Ole G. Mouritsen is a professor of gastrophysics and culinary food innovation at the University of Copenhagen,president of the Danish Gastronomical Academy, and director of the Danish national research and communication centre Taste for Life. Klavs Styrbæk is a chef and leader of the gastronomic enterprise STYRBÆKS, which includes a gourmet restaurant, a cooking school, a catering service, and a product development branch. von Styrbæk, Klavs und Mouritsen, Ole G.

Ole G. Mouritsen is a research scientist and professor of gastrophysics and culinary food innovation at Copenhagen University. His work focuses on basic sciences and their applications within the fields of biotechnology, biomedicine, and food. He is the recipient of numerous prizes for his work and for research communication. His extensive list of publications includes a number of monographs, several of them co-authored with Klavs Styrbæk, which integrate scientific insights with culinary perspectives and have been nominated three times for Gourmand Best in the World Awards. Currently, Ole is president of The Danish Gastronomical Academy and director of the National Danish Taste Centre Taste for Life, which is generously supported by the Nordea Foundation. This is a cross-disciplinary centre that aims to foster a better understanding of the fundamental nature of taste impressions and how we can use this knowledge to make much more informed and healthier food choices. Its extensive educational program reaches out to audiences of all ages, with a special effort directed toward children to shape their dietary habits from an early age. For many years, Ole has been fascinated with the Japanese culinary arts and in explaining the extent to which its techniques and taste elements can be adapted for the Western kitchen. In recognition of his efforts, he was appointed in 2016 as a Japanese Cuisine Goodwill Ambassador by the Japanese Ministry of Agriculture, Forestry, and Fisheries, and in 2017 the Japanese Emperor bestowed upon him The Order of the Rising Sun, Gold Rays With Neck Ribbon, Kyokujitsuchujushö¿¿¿. Klavs Styrbæk is a professional chef who owns and operates STYRBÆKS together with his wife, Pia. By combining a high standard of craftsmanship, sparked by curiosity-driven enthusiasm, he has created a gourmet centre where people can enjoy excellent food and where they can come to learn and take their culinary skills to a whole new level. Klavs is particularly enthusiastic about seeking out unique, local raw ingredients that are incorporated into new taste adventures or used to revisit traditional Danish recipes that might otherwise be forgotten. This delicate balance between innovation and renewal is demonstrated in his award-winning cookbook Mormors mad (Grandmother's Food) (2006), which was honored with a special jury prize at the Gourmand World Cookbook Awards in 2007. In 2008 and 2019 he was awarded an honorary diploma for excellence in the culinary arts by the Danish Gastronomical Academy. Many of the recipes that appear in the books co-authored with Ole originated in the test-kitchens at STYRBÆKS. Jonas Drotner Mouritsen is a graphic designer and owner of the design company Chromascope that specializes in graphic design, animation, and film production. His movie projects have won several international awards. In addition, he has been responsible for layout, photography, and design of several books about food, some of which have been nominated for Gourmand World Cookbook Awards. Mariela Johansen, who has Danish roots, lives in Vancouver, Canada, and holds an MA in Humanities with a special interest in the ancient world. Working with Ole and Klavs, she has translated several monographs, adapting them for a wider English language readership. Two of these, Umami: unlocking the secrets of the fifth taste and Mouthfeel: How Texture Makes Taste, won a Gourmand World Cookbook Award for the best translation of a cookbook published in the USA in 2014 and 2017, respectively.