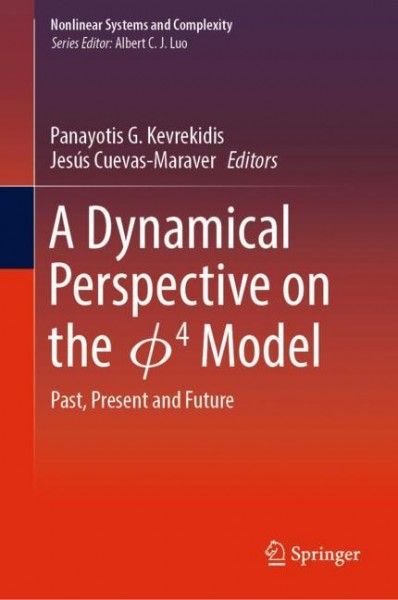 A Dynamical Perspective on the (nonlinear waves) 4 Model

A Dynamical Perspective on the (nonlinear waves) 4 Model
Past, Present and Future

This book presents a careful selection of the most important developments of the \phi^4 model, offering a judicious summary of this model with a view to future prospects and the challenges ahead. Over the past four decades, the \phi^4 model has been the basis for a broad array of developments in the physics and mathematics of nonlinear waves. From kinks to breathers, from continuum media to discrete lattices, from collisions of solitary waves to spectral properties, and from deterministic to stochastic models of \phi^4 (and \phi^6, \phi^8, \phi^12 variants more recently), this dynamical model has served as an excellent test bed for formulating and testing the ideas of nonlinear science and solitary waves. von Kevrekidis, Panayotis G.

P.G. Kevrekidis received his B.Sc. in Physics from the University of Athens in 1996. He went on to complete an M.S. (1998), M.Phil.(2000) and a Ph.D. (2000) in Physics at Rutgers, working under the supervision of Prof. J.L. Lebowitz. He was a postdoc at Princeton's PACM and LANL's T-Division in 2000 and 2001. He joined UMass, Amherst, as an Assistant Professor in Mathematics & Statistics in September 2001, and became an Associate Professor in 2005. He was a Full Professor from 2010 to 2015, when he was awarded a Distinguished University Professorship. Kevrekidis has received a CAREER award (2003), a Humboldt Research Fellowship, an Outstanding Paper Prize from SIAM, the 2008 International Stephanos Pnevmatikos Award for research in Nonlinear Phenomena, the 2013 J.D. Crawford Prize of the Activity Group on Dynamical Systems of SIAM, and the A.F. Pallas award from the Academy of Athens (2013). He was recently (2014-2015) the Stanislaw M. Ulam Scholar in LANL and was elected a Fellow of the American Physical Society (2014). In 2015 he was awarded the Bessel Prize from the Alexander von Humboldt Foundation, and in 2016 he received the inaugural Brooke Benjamin Prize in Nonlinear Waves, as well as a Greek Diaspora Fellowship. In 2017 he was named a Fellow of SIAM. His research has been supported by the NSF, ARO, AFOSR, ERC as well as numerous foundations (such as AvH, BSF & Onassis Foundation). His interests center on the nonlinear dynamics of solitary waves in nonlinear partial differential equations and lattice nonlinear differential difference equations and the properties (existence, stability and dynamics) of such waves. He has published over 550 research papers, given over 180 research lectures, is an associate editor of 2 journals and has authored 6 books (5 books published by Springer and 1 by SIAM). Jesús Cuevas-Maraver received his B.Sc. degree from the University of Seville's Faculty of Physics in 1999. He subsequently joined the Department of Applied Physics I of the same university, where he obtained his Ph.D. in Physics in 2003 under the supervision of Prof. Francisco R. Romero and Prof. Juan F.R. Archilla. He then became an Assistant Professor and, since 2009, he has been an Associate Professor there. His research covers many aspects of nonlinear science, but focuses on the theoretical study of nonlinear localized waves such as solitons, kinks and breathers that emerge in many physical systems. He has considered a wide range of such systems, like crystals, biomolecules, Bose-Einstein condensates, waveguide arrays, nonlinear circuits or transmission lines and metamaterials. Prof. Jesús Cuevas-Maraver has written over 100 scientific publications, which include articles in international journals and books. He has also written several chapters in Springer books, and together with Prof. Kevrekidis, he co-editored Vol. 10 in Springer Series in Nonlinear Systems and Complexity [The sine-Gordon model and its application (2014)], and Vol. 7 of the same series [Localized Excitations in Nonlinear Complex Systems (2014)].