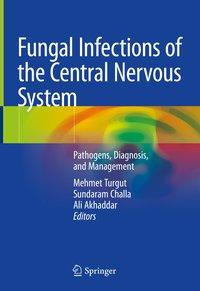 This book provides comprehensive information on fungal infections of the central nervous system (CNS). Fungal infections are still a major public health challenge for most of the developing world and even for developed countries due to the rising numbers of immune compromised patients, refugee movements, and international travel. Although fungal infections involving the CNS are not particularly common, when they do occur, the results can be devastating in spite of recent advances and currently available therapies. Further, over the past several years, the incidence of these infections has seen a steep rise among immunodeficient patients. In this context, aggressive surgery remains the mainstay of management, but conservative antifungal drug treatment complemented by aggressive surgical debridement may be necessary. Yet the optimal management approach to fungal infections of the CNS remains controversial, owing to the limited individual experience and the variable clinical course of the conditions. Addressing that problem, this comprehensive book offers the ideal resource for neurosurgeons, neurologists and other specialists working with infectious diseases. von Turgut, Mehmet

Mehmet Turgut, MD, PhD, is Associate Professor of Neurosurgery at the Adnan Menderes University School of Medicine, Aydin, Turkey. He graduated from the Ege University School of Medicine, Izmir, Turkey and later specialized in neurosurgery at Hacettepe University Hospital, Ankara, Turkey. In 2004, he received his PhD from the Department of Embryology and Histology, Ege University Health Sciences Institute, Izmir, Turkey. He is currently Associate Professor and Head of the Department of Neurosurgery, Adnan Menderes University School of Medicine, Aydin, Turkey. His fields of expertise and research interests are broad and include developmental neuroscience, infectious diseases of the central nervous system, pediatric neurosurgery, spinal surgery, and peripheral nerve surgery. Dr. Turgut is an editorial board member for more than 30 international journals, including European Spine Journal, Journal of Neurological Surgery Part A: Central European Neurosurgery, Surgical Neurology International (SNI): Infection, Journal of Brachial Plexus and Peripheral Nerve Injury, Journal of Spine, Journal of Pediatric Neurology, Journal of Spine & Neurosurgery, and Journal of Neurosciences in Rural Practice, and a reviewer for a wide range of international journals and research programs. He edited a total of 11 books and contributed 41 chapters and other publications, in addition to the lead or co-author of about 300 papers published in peer-reviewed national and international journals.Sundaram Challa , MD, FAMS, FICP is former Dean, Senior Professor and Head, Department of Pathology at Nizam's Institute of Medical Sciences (NIMS), Hyderabad, Telangana State, India and is presently Advisor, DNB (Diplomate of National Board) Pathology at Basavatarakam Indo-American Cancer Hospital and Research Institute, Hyderabad. She is a Fellow of the National Academy of Medical Sciences, Founder Fellow of Indian College of Pathology (ICP), Member of Neurological Society of India (NSI), Indian Academy of Neurology (IAN), Indian Academy of Neurosciences, Indian Society of Neuro-oncology (ISNO) and Founder fellow and President-Elect of Neuropathology Society of India, Past President of Indian Association Of Pathologists and Microbiologists (IAPM), International Academy of Pathology- Indian Division (IAP-ID), Andhra Pradesh (AP) Academy of Medical Sciences, AP Chapter of IAPM. Her fields of expertise and research interests include Neuroinfections, Neuromuscular disorders, Neuro-oncology and Endocrine pathology. She established the state of art Neuropathology laboratory at NIMS. She is the recipient of several awards and honors throughout her career. She delivered a number of orations received Award for Excellence in Teaching (2010) and Lifetime Acheiment Award (2015). She served as associate Editor of IAPM and Neurology India (NI) and is a member on the panel of reviewers for many journals. She edited two books and contributed 18 chapters to textbooks & monograms; she published over 230 papers in peer reviewed national and international journals. She is the resource person for several CMEs and delivered more than 130 guest lectures.Ali Akhaddar, MD, IFAANS, is Professor of Neurosurgery at the Faculty of Medicine, Mohammed V University in Rabat (Morocco) and Head of the Department of Neurosurgery at Avicenne Military Hospital of Marrakech (Morocco). He is an Expert Member of the Scientific Committees of the National Scientific and Technological Research Center of Morocco (CNRST). Dr Akhaddar is an International Fellow of the American Association of Neurological Surgeons (AANS), member of the Congress of Neurological Surgeons (CNS), the French speaking society of Neurosurgery (SNCLF), the Military Neurosurgeons Committee in the World Federation of Neurosurgical Societies (WFNS), and member of the American Association for the Advancement of Science (AAAS). His fields of expertise and research interests are broad and include central nervous system infections, spinal surgery, pituitary tumors, stereotactic surgery, and medical writing. He has received many awards during his career, including from the Moroccan Society of Neurosurgery (2007), the World Federation of Neurosurgical Societies [Traveling Fellowship Award: Nagoya 2007, Boston 2009 and Seoul 2013], the University of Mohammed V in Rabat (2011 and 2017) and the French Society of Hospitals' History (SFHH) (2014). Dr Akhaddar is the Associate Editor-in-Chief of Surgical Neurology International [Infection]. He is a reviewing editor for many medical journals. He is the author of six previous books (three with Springer*); and has authored and co-authored more than 200 papers published in peer-reviewed journals (154 indexed in PubMed*) and ten book chapters.