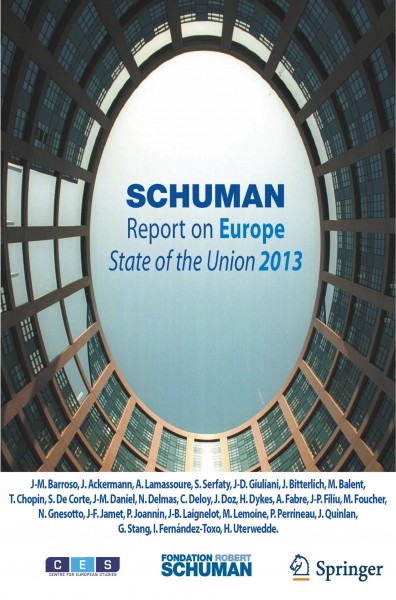 Schuman Report on Europe
State of the Union 2013

The Schuman Report on the State of the Union is a work of reference which everyone now looks forward to reading every year. For decision makers and observers of European policy it is a source of original thought and ideas, underpinned by a strong requirement for quality. It is a tool for those who are looking for reliable sources in terms of European statistics and macro-economic data.Some eminent people have chosen to contribute their ideas also. In 2013, Josef Ackermann, former CEO of Deutsche Bank, Chairman of the Board of Directors of Zurich Insurance Group , offers his analysis of the banking Union, Lord Dykes, Foreign Affairs Spokesperson for the LibDems in the House of Lords, provides readers with his view of the future for the UK in the European Union and Alain Lamassoure, MEP, Chairman of the Budget Committee in the European Parliament, suggests a budgetary federation.The very best specialists help to throw light on the major trends ongoing in the economy and also in international and European politics.This book includes around 35 maps that are often unique, in explanation of the major issues the Union is facing.It also includes a summary of political Europe which analyses the 2012 electoral year (among France, Greece, The Netherlands, Romania), looks into the political and economic representation of women in Europe and draws up an overview of normative output in the Union in 2012.A unique series of commented statistics and maps covers all of the main topical issues (growth, buying power, economy, demography, immigration, energy, environment) and enables the Schuman Report 2013 to present a full view of the European Union and its policies. von Schuman, Foundation