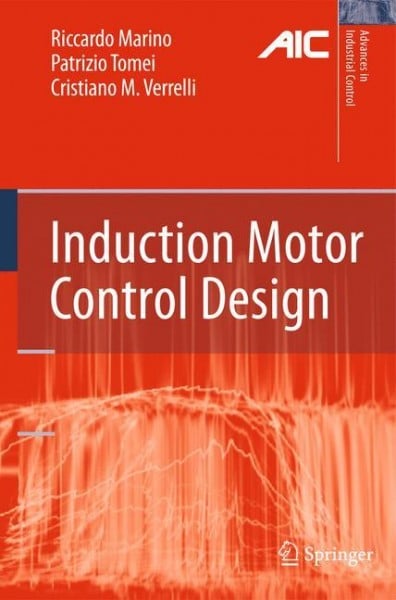 This book provides the most important steps and concerns in the design of estimation and control algorithms for induction motors. A single notation and modern nonlinear control terminology is used to make the book accessible, although a more theoretical control viewpoint is also given. Focusing on the induction motor with, the concepts of stability and nonlinear control theory given in appendices, this book covers: speed sensorless control; design of adaptive observers and parameter estimators; a discussion of nonlinear adaptive controls containing parameter estimation algorithms; and comparative simulations of different control algorithms. The book sets out basic assumptions, structural properties, modelling, state feedback control and estimation algorithms, then moves to more complex output feedback control algorithms, based on stator current measurements, and modelling for speed sensorless control. The induction motor exhibits many typical and unavoidable nonlinear features. von Marino, Riccardo und Tomei, Patrizio und Verrelli, Cristiano M.

Born in Ferrara in 1956, Riccardo Marino, received his degree in Nuclear engineering "cum laude" in July 1979 and the Master in Systems Engineering in 1981 from the University of Rome "La Sapienza". In 1982 he obtained the title of Doctor of Science in System Science and Mathematics from Washington University in St. Louis, Missouri, U.S.A. Since 1984 he has been with the Department of Electronic Engineering at the University of Rome "Tor Vergata" where he is Professor of Systems Theory (he was a researcher from 1984 to 1987 and Associate Professor from 1987 to 1990). He taught the course on Systems Theory from 1987 to 1999, the course on Dynamical Systems from 2000 to 2005. He currently teaches from 2000 the course on Nonlinear Systems. Professor Marino has visited the following institutions collaborating on joint research programs: University of Illinois at Urbana-Champaign, USA, in 1985/86, in 1989 and in 1990, Twente University in Enschede, The Netherlands, in 1986, Polytechnik of Kiev, Ukraine, in 1988, University of California at Santa Barbara, USA in 1992, Ecole des Mines de Paris, Fontainebleau, in 1999, Sophia University, Tokyo, in 2002 and in 2007. He is co-author of the book Nonlinear Control Design: Geometric, Adaptive and Robust, Prentice Hall, Hemel Hempstead, 1995, of more than 70 journal papers and more than 100 communications in international congresses. His scientific interests and contributions are mainly on the design of estimation and control algorithms and their applications to robots, electric machines, and vehicles. Professor Marino was the coordinator of the Doctoral Program in Sensor and Learning Systems Engineering at the University of Rome Tor Vergata from 1999 to 2007. He was associate editor of several scientific journals, member of the Directing Board of the European Control Association and director of several research projects financed by the Italian Ministry of University. Patrizio Tomei was born in Rome, Italy, on June 21, 1954. He received the "dottore" degree in Electronic Engineering in 1980 and the "dottore di ricerca" degree in 1987, both from the University of Rome "La Sapienza". He is currently Professor of Adaptive Systems at the University of Rome "Tor Vergata". He is co-author (with R. Marino) of the book Nonlinear Control Design (Prentice Hall, 1995). His research interests are in adaptive control, nonlinear control, robotics, and control of electrical machines. Cristiano Maria Verrelli was born in Italy on September 12, 1977. He received the Ph.D. in Systems Engineering from the University of Rome "Tor Vergata" in 2005. He has been visiting scholar at Laboratoire des signaux et systèmes L2S (Supélec, Gif-Sur-Yvette) and at Laboratoire Systèmes Complexes LSC (Evry) in 2004 and 2005. He currently is a Researcher at the Department of Electronic Engineering at the University of Rome "Tor Vergata". His research interests are in robust adaptive nonlinear control with application to electrical machines.