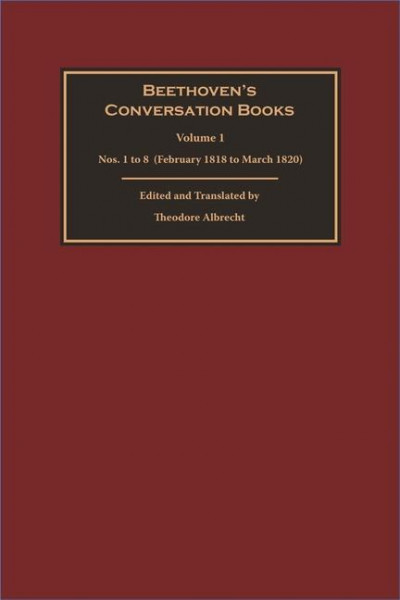 Ludwig van Beethoven (1770-1827) is recognized the world over as a composer of musical masterpieces exhibiting heroic strength, particularly in the face of his increasing deafness from ca. 1798. By 1818, the Viennese composer hadbegun carrying blank booklets with him, for his acquaintances to jot their sides of conversations, while he answered aloud. Often, he himself used the pocket-sized booklets to make shopping lists and other reminders, including occasional early sketches for his compositions. Today, 139 of these booklets survive, covering the years 1818 up to the composer's death in 1827 and including such topics as music, history, politics, art, literature, theatre, religion, and education as perceived on a day-to-day basis in post-Napoleonic Europe. An East German edition, begun in the 1960s and essentially complete by 2001, represents a diplomatic transcription of these documents. It is a masterpiece of pure scholarship but is difficult to use for anyone who is not a specialist. Moreover, Beethoven scholarship has moved on significantly since the long-ranging genesis of the German edition. These important booklets arehere translated into English in their entirety for the first time. The volumes in this series include an updated editorial apparatus, with revised and expanded notes and many new footnotes exclusive to this edition, and brand newintroductions, which together place many of the quickly changing conversational topics into context. Due to the editor's many years of research in Vienna, his acquaintance with its history and topography, as well as his familiarity with obscure documentary resources, this edition represents an entirely new venture in source studies - vitally informative for scholars not only in music but also in a wide variety of disciplines. At the same time, these oftenlively and compelling conversations are now finally accessible for the English-speaking music lover or history buff who might want to dip into them and hear what Beethoven and his friends were discussing at the next table.BR THEODORE ALBRECHT is Professor of Musicology at Kent State University, Ohio. von Albrecht, Theodore