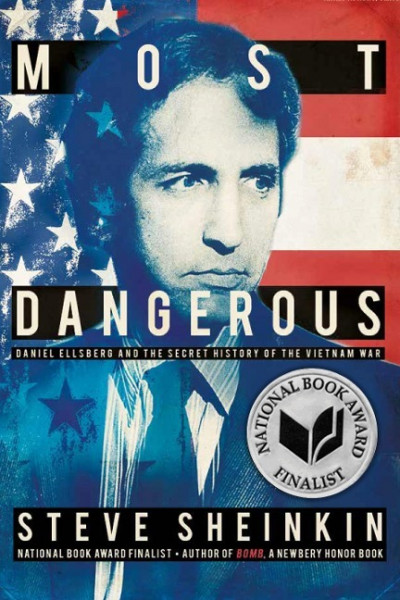 Most Dangerous: Daniel Ellsberg and the Secret History of the Vietnam War

Most Dangerous: Daniel Ellsberg and the Secret History of the Vietnam War

Most Dangerous: Daniel Ellsberg and the Secret History of the Vietnam War is New York Times bestselling author Steve Sheinkin's award-winning nonfiction account of an ordinary man who wielded the most dangerous weapon: the truth. "Easily the best study of the Vietnam War available for teen readers."-Kirkus Reviews (starred review) A YALSA Excellence in Nonfiction Award winnerA National Book Award finalistA Bulletin of the Center for Children's Books Blue Ribbon bookA Los Angeles Times Book Prize for Young Adult Literature finalistSelected for the Notable Social Studies Trade Books for Young People List In 1964, Daniel Ellsberg was a U.S. government analyst, helping to plan a war in Vietnam. It was the height of the Cold War, and the government would do anything to stop the spread of communism-with or without the consent of the American people. As the fighting in Vietnam escalated, Ellsberg turned against the war. He had access a top-secret government report known as the Pentagon Papers, and he knew it could blow the lid off of years of government lies. But did he have the right to expose decades of presidential secrets? And what would happen to him if he did it? A lively book that interrogates the meanings of patriotism, freedom, and integrity, the National Book Award finalist Most Dangerous further establishes Steve Sheinkin-author of Newbery Honor book Bomb as a leader in children's nonfiction.This thoroughly-researched and documented book can be worked into multiple aspects of the common core curriculum."Gripping."-New York Times Book Review"A master of fast-paced histories...[this] is Sheinkin's most compelling one yet. "-Washington PostAlso by Steve Sheinkin:Bomb: The Race to Build-and Steal-the World's Most Dangerous WeaponThe Notorious Benedict Arnold: A True Story of Adventure, Heroism & TreacheryUndefeated: Jim Thorpe and the Carlisle Indian School Football TeamThe Port Chicago 50: Disaster, Mutiny, and the Fight for Civil RightsWhich Way to the Wild West?: Everything Your Schoolbooks Didn't Tell You About Westward ExpansionKing George: What Was His Problem?: Everything Your Schoolbooks Didn't Tell You About the American RevolutionTwo Miserable Presidents: Everything Your Schoolbooks Didn't Tell You About the Civil WarBorn to Fly: The First Women's Air Race Across America von Sheinkin, Steve