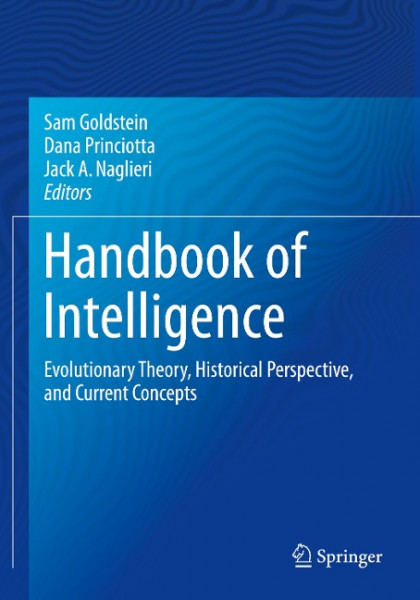 Numerous functions, cognitive skills, and behaviors are associated with intelligence, yet decades of research has yielded little consensus on its definition. Emerging from often conflicting studies is the provocative idea that intelligence evolved as an adaptation humans needed to keep up with - and survive in - challenging new environments. The Handbook of Intelligence addresses a broad range of issues relating to our cognitive and linguistic past. It is the first full-length volume to place intelligence in an evolutionary/cultural framework, tracing the development of the human mind, exploring differences between humans and other primates, and addressing human thinking and reasoning about its own intelligence and its uses. The works of pioneering thinkers - from Plato to Darwin, Binet to Piaget, Luria to Weachsler - are referenced to illustrate major events in the evolution of theories of intelligence, leading to the current era of multiple intelligences and special education programs. In addition, it examines evolutionary concepts in areas as diverse as creativity, culture, neurocognition, emotional intelligence, and assessment. Featured topics include:The evolution of the human brain from matter to mind Social competition and the evolution of fluid intelligence Multiple intelligences in the new age of thinking Intelligence as a malleable construct From traditional IQ to second-generation intelligence tests The evolution of intelligence, including implications for educational programming and policy. The Handbook of Intelligence is an essential resource for researchers, graduate students, clinicians, and professionals in developmental psychology; assessment, testing and evaluation; language philosophy; personality and social psychology; sociology; and developmental biology. von Goldstein, Sam und Princiotta, Dana und Naglieri, Jack A.