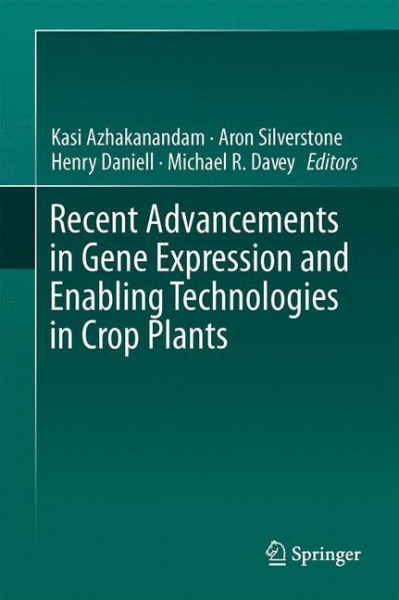 In this book, authors who are experts in their fields describe current advances on commercial crops and key enabling technologies that will underpin future advances in biotechnology. They discuss state of the art discoveries as well as future challenges. Tremendous progress has been made in introducing novel genes and traits into plant genomes since the first creation of transgenic plants thirty years ago, and the first commercialization of genetically modified maize in 1996. Consequently, cultivation of biotech crops with useful traits has increased more than 100-fold from 1.7 million hectares in 1996 to over 175 million hectares globally in 2013. This achievement has been made possible by continued advances in understanding the basic molecular biology of regulatory sequences to modulate gene expression, enhancement of protein synthesis and new technologies for transformation of crop plants.This book has three sections that encompass knowledge on genetically modified (GM) food crops that are currently used by consumers, those that are anticipated to reach the market place in the near future and enabling technologies that will facilitate the development of next generation GM crops. Section I focuses only on genetically modified maize and soybean (3 chapters each), while Section II discusses the GM food crops rice, wheat, sorghum, vegetables and sugar cane. Section III covers exciting recent developments in several novel enabling technologies, including gene targeting, minichromosomes, and in planta transient expression systems. von Azhakanandam, Kasi und Silverstone, Aron und Daniell, Henry und Davey, Michael R.

Kasi AzhakanandamKasi Azhakanandam earned his Bachelor, Master and M. Phil. Degrees in Biology from the University of Madras, India and a Ph.D. in Plant Biotechnology from the University of Nottingham, UK. He worked as a Guest Lecturer at Madras Christian College for a short period before joining Mahyco, India, as a Deputy Chief Scientist/Principal Investigator, where he established a crop transformation laboratory. He lead a team which established transformation in commercial Indica rice, Indian cotton varieties and six different vegetable crops, including Bt eggplant; these are waiting for approval for commercial cultivation in India. He also successfully produced marker-free rice and vegetable crops. Following his postdoctoral work related to vaccine production for cervical cancer at North Carolina State University, Dr. Azhakanandam joined Syngenta Biotechnology, Inc., at Research Triangle Park, NC as a Staff Scientist III. He has worked on a range of projects to improve crops through genetic engineering, and currently leads a technical team for developing new traits for corn.Aron SilverstoneAron Silverstone gained a Bachelor's Degree in Biology from Harvard University, and a Ph.D. in Plant Physiology from the University of California, Davis. He conducted his postdoctoral research at Duke University's Department of Botany, studying gibberellin biosynthesis and response. Following his postdoctoral work, Dr. Silverstone joined Syngenta Biotechnology, Inc., at Research Triangle Park, NC as a Staff Scientist I. He has worked on several projects to improve crops through genetic engineering, and is currently the global project manager for soybean traits.Henry DaniellHenry Daniell, received his education in India, and is currently a Professor and Director of Translational Research at the University of Pennsylvania. He is a Fellow of the American Association for the Advancement of Science and a foreign member of the Italian National Academy of Sciences (14th American to be inducted in the past 230 years). He is the Editor in Chief of the Plant Biotechnology Journal, Oxford, UK. Dr. Daniell is the recipient of several awards, including the American Diabetes Association Award, Bayer Hemophilia Global Award, and Bill and Melinda Gates Foundation Award, for his scientific contributions. He is recognized for pioneering chloroplast genetic engineering as a new platform to produce and deliver orally low cost vaccines and biopharmaceuticals bioencapsulated in plant cells. His invention was ranked by Nature Biotechnology among the top ten inventions of the past decade and among Biomed Central's Hot 100 authors in the world. He has more than 150 published patents and over 200 scientific publications.Michael R. DaveyMichael Davey has a B.Sc. Honours Degree in Botany from University College, Swansea, Wales, and a Ph.D. from the University of Leicester, UK. In 1970, he was appointed to a research position at the University of Nottingham, UK where he continued his work on plant ultrastructure and gene transfer techniques. He has published extensively on plant cell culture and genetic engineering, and holds an Honorary Lectureship in the School of Biosciences, University of Nottingham.