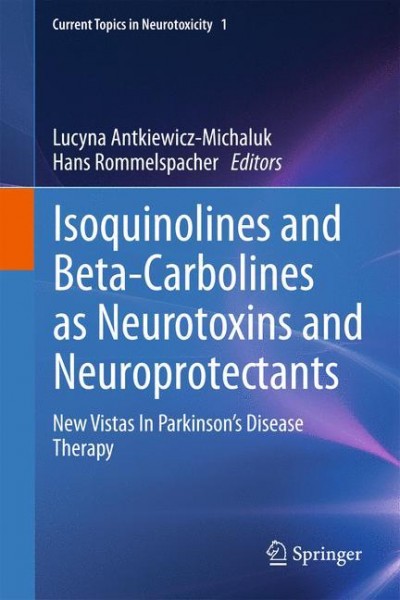 Isoquinolines And Beta-Carbolines As Neurotoxins And Neuroprotectants

The specific topic, "Isoquinolines And Beta-Carbolines As Neurotoxins And Neuroprotectants - New Perspectives In Parkinson`S Disease Therapy," was chosen in light of accumulating neurobiological evidence indicating that, in addition to exogenous neurotoxins (e.g., 1-methyl-4-phenyl-1,2,3,6-tetrahydropyridine [MPTP]), endogenous compounds may play an important role in the most common neurodegenerative disorders (e.g., Parkinson`s disease). Two groups of amine related compounds, which appeared chemically like MPTP, were detected in human brain and cerebrospinal fluid (CSF): ß-carbolines (BCs) and tetrahydroisoquinolines  (TIQs). These are heterocyclic compounds formed endogenously from phenylalanine/tyrosine (TIQs) and tryptophan, tryptamine, and 5-hydroxytryptamine (BCs), respectively and exert a wide spectrum of psychopharmacological and behavioral effects. The TIQs and BCs may bind to their own high affinity sites on neuronal membranes associated with or located close to the receptors of neurotransmitters. Research on TIQs and BCs is stimulated also by their possible role in pathological conditions, especially parkinsonism and alcoholism. Recently, clinical interest has been spurred by their role as neuroprotective, and even neurorestorative, anticonvulsant and antiaddictive, substances.             In this book we are going to summarize, for the first time, the results from behavioral, neurochemical and molecular experiments, which demonstrate a wide spectrum of TIQs and BCs effects - from their rather mild neurotoxic actions to the important neuroprotective and antiaddictive properties. Additionally, the recent results of experimental studies in vivo have allowed a much better understanding and simultaneous comparison of the neurochemical and molecular mechanisms underlying the neuroprotective and neurotoxic actions of endogenous TIQs and BCs and have pointed to the possibility of their therapeutic applications in neurodegenerative diseases such as Parkinson's disease. von Antkiewicz-Michaluk, Lucyna und Rommelspacher, Hans