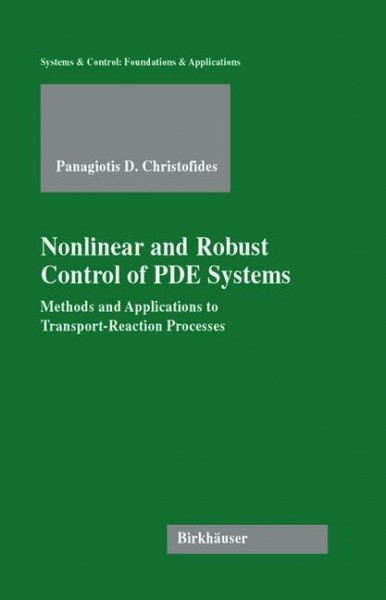 The interest in control of nonlinear partial differential equation (PDE) sys­ tems has been triggered by the need to achieve tight distributed control of transport-reaction processes that exhibit highly nonlinear behavior and strong spatial variations. Drawing from recent advances in dynamics of PDE systems and nonlinear control theory, control of nonlinear PDEs has evolved into a very active research area of systems and control. This book­ the first of its kind- presents general methods for the synthesis of nonlinear and robust feedback controllers for broad classes of nonlinear PDE sys­ tems and illustrates their applications to transport-reaction processes of industrial interest. Specifically, our attention focuses on quasi-linear hyperbolic and parabolic PDE systems for which the manipulated inputs and measured and controlled outputs are distributed in space and bounded. We use geometric and Lyapunov-based control techniques to synthesize nonlinear and robust controllers that use a finite number of measurement sensors and control actuators to achieve stabilization of the closed-loop system, output track­ ing, and attenuation of the effect of model uncertainty. The controllers are successfully applied to numerous convection-reaction and diffusion-reaction processes, including a rapid thermal chemical vapor deposition reactor and a Czochralski crystal growth process. The book includes comparisons of the proposed nonlinear and robust control methods with other approaches and discussions of practical implementation issues. von Christofides, Panagiotis D.