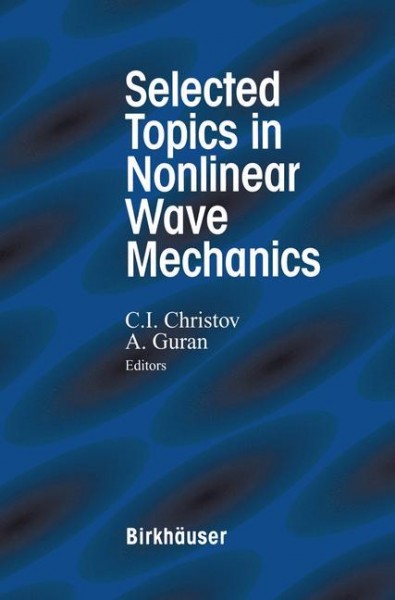 This book gives an overview ofthe current state of nonlinear wave mechanics with emphasis on strong discontinuities (shock waves) and localized self­ preserving shapes (solitons) in both elastic and fluid media. The exposition is intentionallyat a detailed mathematical and physical level, our expectation being that the reader will enjoy coming to grips in a concrete manner with advances in this fascinating subject. Historically, modern research in nonlinear wave mechanics began with the famous 1858 piston problem paper of Riemann on shock waves and con­ tinued into the early part of the last century with the work of Hadamard, Rankine, and Hugoniot. After WWII, research into nonlinear propagation of dispersive waves rapidly accelerated with the advent of computers. Works of particular importance in the immediate post-war years include those of von Neumann, Fermi, and Lax. Later, additional contributions were made by Lighthill, Glimm, Strauss, Wendroff, and Bishop. Dispersion alone leads to shock fronts of the propagating waves. That the nonlinearity can com­ pensate for the dispersion, leading to propagation with a stable wave having constant velocity and shape (solitons) came as a surprise. A solitary wave was first discussed by J. Scott Russell in 1845 in "Report of British Asso­ ciations for the Advancement of Science. " He had, while horseback riding, observed a solitary wave travelling along a water channel and followed its unbroken progress for over a mile. von Christov, C. I. und Guran, Arde