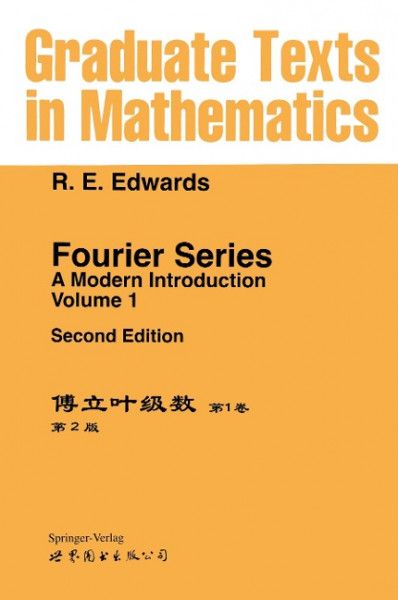 The principal aim in writing this book has been to provide an intro­ duction, barely more, to some aspects of Fourier series and related topics in which a liberal use is made of modem techniques and which guides the reader toward some of the problems of current interest in harmonic analysis generally. The use of modem concepts and techniques is, in fact, as wide­ spread as is deemed to be compatible with the desire that the book shall be useful to senior undergraduates and beginning graduate students, for whom it may perhaps serve as preparation for Rudin's Harmonic Analysis on Groups and the promised second volume of Hewitt and Ross's Abstract Harmonic Analysis. The emphasis on modem techniques and outlook has affected not only the type of arguments favored, but also to a considerable extent the choice of material. Above all, it has led to a minimal treatment of pointwise con­ vergence and summability: as is argued in Chapter 1, Fourier series are not necessarily seen in their best or most natural role through pointwise-tinted spectacles. Moreover, the famous treatises by Zygmund and by Baryon trigonometric series cover these aspects in great detail, wl:tile leaving some gaps in the presentation of the modern viewpoint; the same is true of the more elementary account given by Tolstov. Likewise, and again for reasons discussed in Chapter 1, trigonometric series in general form no part of the program attempted. von Edwards, R. E.