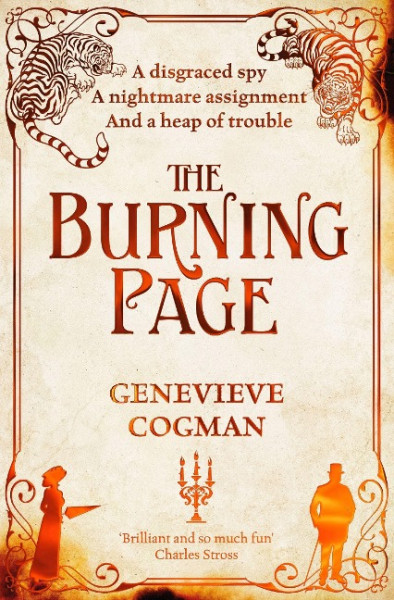 The Burning Page
The Invisible Library 03

When it's your job to save the day - where do you start?Librarian spy Irene has standards to maintain, especially while on probation. And absconding from a mission via a besieged building doesn't look good. But when her escape route home goes up in flames, what's a spy to do? However, it seems Gates back to the Library are malfunctioning across dozens of worlds. Worse still, her nemesis Alberich is responsible - and he plans to annihilate the Library itself.Irene and assistant Kai are posted to St Petersburg, to help combat this threat. Here Alberich emerges, as Irene tries to save her friend Vale and foil assassination attempts. Then one incredibly dangerous opportunity to save the Library emerges. Saving herself would be a bonus . . .Praise for the series'In the humorous and satirical tradition of Discworld' Guardian'Reminiscent of the works of Diana Wynne Jones and Neil Gaiman, Cogman's novel is a true treat'Publishers Weekly von Cogman, Genevieve

Genevieve Cogman started on Tolkien and Sherlock Holmes at an early age, and has never looked back. But on a perhaps more prosaic note, she has an MSc in Statistics with Medical Applications and has wielded this in an assortment of jobs: clinical coder, data analyst and classifications specialist. The Invisible Library is her debut novel, but she has also previously worked as a freelance roleplaying game writer. Following The Invisible Library, The Masked City and The Burning Page, The Invisible Library series continues with The Lost Plot and The Mortal World. Genevieve Cogman's hobbies include patchwork, beading, knitting and gaming, and she lives in the north of England.