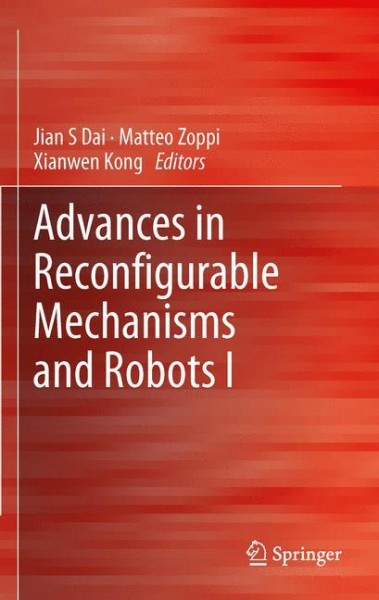 Advances in Reconfigurable Mechanisms and Robots I

Advances in Reconfigurable Mechanisms and Robots I

Dr JS Dai is a leading figure in mechanisms and robotics and fellow of ASME and IMechE. His research interest is in screw theory and algebra, theoretical kinematics, reconfigurable mechanisms and robots, grasping and manipulation as well as their application to industrial productions and medical robotics including rehabilitation robotics. In the past twenty-five years, he published over 400 peer-reviewed papers, 15 book chapters and several books including the recent monograph entitled "Screw Algebra and Geometrical Approaches for Robotics" by Springer with its Chinese translation of a 14-chapter version with the same title by Higher Education Press of China and a 9-chapter version entitled "Screw Algebra and Lie Groups and Lie Algebra" in the series of the foundation of modern mathematics by the same publisher. He is the recipient of a number of paper, service and excellence awards, has successfully graduated 18 PhDs and is currently associate editor of IEEE Transactions on Robotics, ASME Transactions: Journal of Mechanisms and Robotics, and Robotica. Dr Dai is the conference chair of the First and Second ASME International Conference on Reconfigurable Mechanisms and Robots and the conference chair of the 36th ASME Mechanisms and Robotics International Conference. He is the director of the centre for advanced mechanisms and robotics at Tianjin University, "Yangtze Chair Professor" awarded by the Ministry of Education of China and Chair in Mechanisms and Robotics at King's College London. Dr Matteo Zoppi is a member of ASME and IEEE and researcher in robotics at the Department of Mechanics of the University of Genoa, PMAR Robotics research group with M.Sc. in mechanical engineering and Ph.D. in robotics. He is active in the areas of inventive design of robotic systems and in development of methods for the synthesis and analysis of mechanisms for robotics. He is involved in European projects in the areas of ICT, NMP, Transport and Security, with subjects ranging from smart manufacturing to intelligent vehicles. His special interest is in the design and development of metamorphic robotic grippers and hands for the manipulation of textiles and soft materials with expertise in the development of cooperative, flexible fixturing systems for manufacturing and assembly in automotive and aeronautical applications. Dr X. Kong is an expert in mechanisms and robotics from Heriot-Watt University, United Kingdom. His research focuses on mechanisms, robotics, mechatronics and their industrial, biomedical and renewable energy applications at the macro-, micro- and nano-scales. He has published a monograph entitled "Type Synthesis of Parallel Mechanisms" by Springer with its Russian translation to be published by the Russian publisher FIZMATLIT - Nauka Publishers, two United States patents, and a number of international journal and conference papers. He has proposed a general approach for the creative design of parallel manipulators based on screw theory and an innovative representation of motion patterns. Especially, he invented the Tripteron, a ground-breaking decoupled translational parallel robot. Recently, he has made advances in the type synthesis of disassembly-free reconfigurable parallel manipulators and spatial compliant parallel manipulators for micro- and nano-manipulation. He has also made original contributions in the algebraic determination of the unique current pose of several classes of parallel manipulators, which is a non-linear problem.. He is currently an associate editor for the international journal of Mechanism and Machine Theory and an elected committee member of ASME Mechanisms and Robotics Committee.