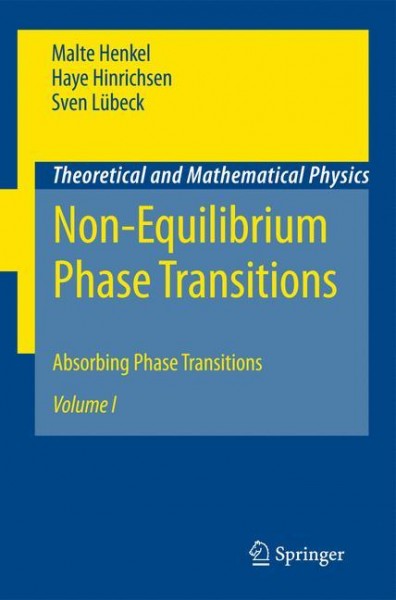 "The career structure and funding of the universities [. . . ] currently strongly d- courages academics and faculties from putting any investment into teaching - there are no career or ?nancial rewards in it. This is a great pity, because [. . . ] it is the need toengage indialogue,and to makethings logicaland clear,that istheprimary defence against obscurantism and abstraction. " B. Ward-Perkins, The fall of Rome, Oxford (2005) This is the ?rst volume of a planned two-volume treatise on non-equilibrium phase transitions. While such a topic might sound rather special and a- demic, non-equilibrium critical phenomena occur in much wider contexts than their equilibrium counterparts, and without having to ?ne-tune th- modynamic variables to their 'critical' values in each case. As a matter of fact, most systems in Nature are out of equilibrium. Given that the theme of non-equilibrium phase transitions of second order is wide enough to amount essentially to a treatment of almost all theoretical aspects of non-equilibrium many-body physics, a selection of topics is required to keep such a project within a manageable length. Therefore, Vol. 1 discusses a particular kind of non-equilibrium phase transitions, namely those between an active, ?- tuating state and absorbing states. Volume 2 (to be written by one of us (MH) with M. Pleimling) will be devoted to ageing phenomena. von Henkel, Malte und Hinrichsen, Haye und Lübeck, Sve