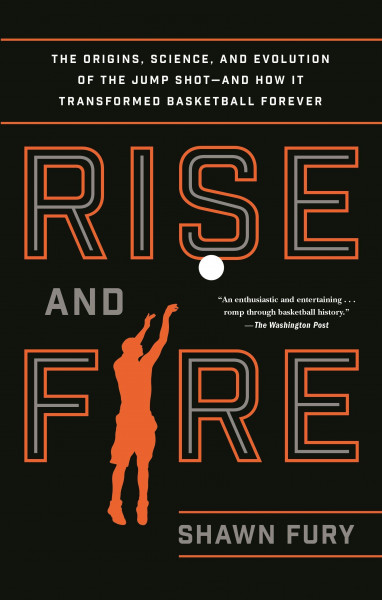 Rise and Fire: The Origins, Science, and Evolution of the Jump Shot--And How It Transformed Basketba

Rise and Fire: The Origins, Science, and Evolution of the Jump Shot--And How It Transformed Basketba

It's hard to believe that there was a time when the jump shot didn't exist in basketball. When the sport was invented in 1891, players would take set shots with both feet firmly planted on the ground. Defenders controlled the sport, the pace was slower, and games would frequently end with scores fit for a football field. It took almost forty years before players began shooting jump shots of any kind and sixty-five years before it became a common sight. When the first jump shooting pioneers left the ground, they rose not only above their defenders, but also above the sport's conventions. The jump shot created a soaring offense, infectious excitement, loyal fans, and legends. Basketball would never be the same.Rise and Fire celebrates this crucial shot while tracing the history of how it revolutionized the game, shedding light on all corners of the basketball world, from NBA arenas to the playgrounds of New York City and the barns of Indiana. Award-winning journalist Shawn Fury obsesses over the jump shot, explores its fundamentals, puzzles over its complexities, marvels at its simplicity, and honors those who created some of basketball's greatest moments. Part history, part travelogue, and part memoir, Rise and Fire bounces from the dirt courts of the 1930s to today's NBA courts and state-of-the-art shooting labs, examining everything from how nets and rims affect a shooter to rivalries between shooting coaches to how the three-pointer came to rule the game. Impeccably researched and engaging, the book features interviews and profiles of legendary figures like Jerry West, Bob McAdoo, Ray Allen, and Denise Long---the first woman ever drafted by the NBA, plus dozens more, revealing the evolution of the shot over time.Analyzing the techniques and reliving some of the most unforgettable plays from the greats, Fury creates a technical, personal, historical, and even spiritual examination of the shot. This is not a dry how-to textbook of basketball mechanics; it is a lively tour of basketball history and a love letter to the sport and the shot that changed it forever. von Fury, Shawn