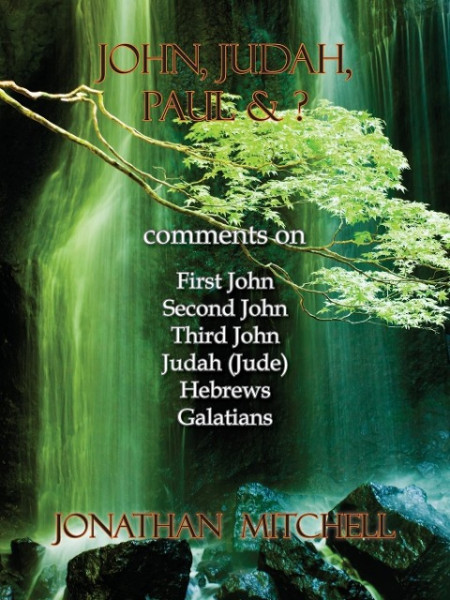 This second volume, in a series of commentaries on New Testament letters, covers 1 John, 2 John, 3 John, Judah (Jude), Hebrews and Galatians. The interpretation and comments are based upon The New Testament, God's Message of Goodness, Ease and Well-being Which Brings God's Gifts of His Spirit, His Life, His Grace, His Power, His Fairness, His Peace and His Love, translated by Jonathan Mitchell. The text of each of these letters is given and the meanings of the verses are explained, giving the significances of the tenses of the Greek verbs that are used, presenting consideration of the multiple functions of the noun cases in prepositional phrases where there is no expressed preposition, and citing other New Testament passages that might have relevance to the verse being discussed. The translation itself is expanded and amplified, and presents multiple renderings of many phrases, clauses and verses. My conclusions reflect this expanded translation, and take into consideration the semantic range of many Greek words. Additional potential lexical meanings are parenthetically inserted into the text of the translation, along with variant manuscript readings. I have given much attention to the significance of the Greek verb tenses and to the functions of the noun cases, rendering the different ways that each of them could be translated within its context. Each verse is presented in bold face with alternate renderings parenthetically given in light face. The main guides for interpreting the original works are the translation and the context, together with careful attention given to the culture and historical setting of the people to whom these letters were written. A concise introduction begins the comments on each letter. I make references to other New Testament letters and to the four gospels, as well as occasionally citing Old Testament passages that relate to the context. Other commentators' quotes, as well as insights from friends, are also cited. In short, this work is intended to shed new light based upon a correct understanding of the Greek texts within the perspective of the local life situations and their larger, first century contexts. Equally important, the intent is to serve as a catalyst for critical thinking regarding the impact of these letters upon our lives today. In addition to these commentaries, six topical studies have also been included. Sample passages of the NT translation and of the first volume in this series of commentaries, Peter, Paul and Jacob, can be found at the Jonathan Mitchell New Testament website. von Mitchell, Jonathan Paul

JONATHAN MITCHELL is a teacher, speaker and translator of the Greek New Testament. He began his study of the Greek in 1962 and holds a Master's degree in Anthropology from Northern Arizona University. "I want to share with you my passion for the Greek New Testament. I have taken some bold steps to reveal to you its depth and richness, along with varying approaches to words, phrases and verses -- so that you, the reader, will have a greater participation in understanding our Lord, Jesus Christ, through the Greek Scriptures. This work has been a labor of love... a love for the Word, for the Truth and for people. It began as a quest to better know the Scriptures, but it has become a journey into the heart of our Father. What started as a personal challenge grew into a desire to share the wonders I found in His inexhaustible Word. This is by no means a finished work, but continues to be an ongoing and unfolding revelation. These studies and writings are interpretations considering the contexts, figures of speech, symbols, types of literature and cultural factors. I use Scripture to interpret Scripture, looking at the patterns of God's dealings as set forth in the Hebrew Bible. Searching out the literal meaning of Greek words and endeavoring to minimize doctrinal bias, I depend upon the unveilings from His Spirit. May this bless you in your search into the things of the Father, and to more authentically know the Truth, Who is our Life. My prayer is that the One who makes all things real, the 'set-apart Breath-effect,' will breathe these words into each and every heart that reads them. May God use this work to bring blessings to each reader, and to bring His reign into every heart." - Jonathan Mitchell