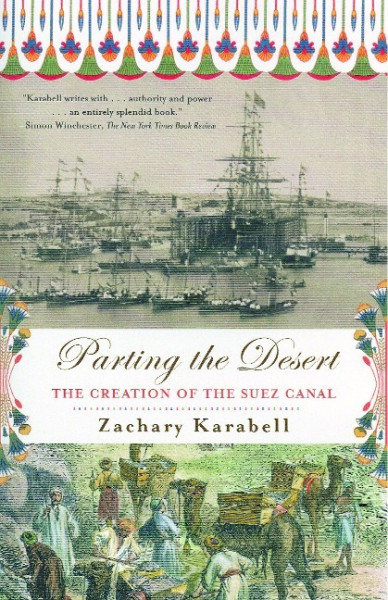 Parting the Desert: The Creation of the Suez Canal

Parting the Desert: The Creation of the Suez Canal

Award-winning historian Zachary Karabell tells the epic story of the greatest engineering feat of the nineteenth century--the building of the Suez Canal-- and shows how it changed the world.The dream was a waterway that would unite the East and the West, and the ambitious, energetic French diplomat and entrepreneur Ferdinand de Lesseps was the mastermind behind the project. Lesseps saw the project through fifteen years of financial challenges, technical obstacles, and political intrigues. He convinced ordinary French citizens to invest their money, and he won the backing of Napoleon III and of Egypt's prince Muhammad Said. But the triumph was far from perfect: the construction relied heavily on forced labor and technical and diplomatic obstacles constantly threatened completion. The inauguration in 1869 captured the imagination of the world. The Suez Canal was heralded as a symbol of progress that would unite nations, but its legacy is mixed. Parting the Desert is both a transporting narrative and a meditation on the origins of the modern Middle East. von Karabell, Zachary

Zachary Karabell was educated at Columbia; Oxford, where he received a degree in Modern Middle Eastern Studies; and Havard, where he received his Ph.D. in 1996. He has taught at Harvard, the University of Massachusetts at Boston, and Dartmouth. He is the author of several books, including The Last Campaign: How Harry Truman Won the 1948 Election, which won the Chicago Tribune Heartland prize. His essays and reviews have appeared in various publications, such as The New York Times, the Los Angeles Times, Foreign Policy, and Newsweek. He lives in New York City.