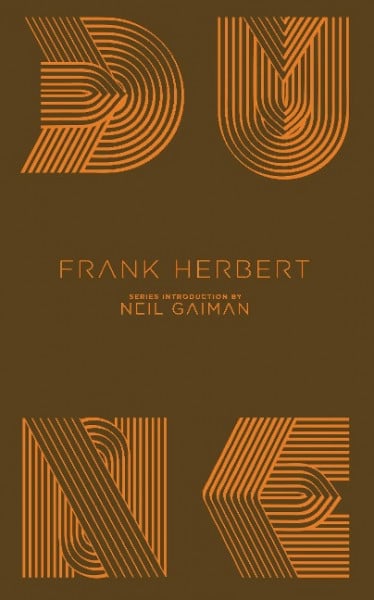 Soon to be a major motion picture starring Timothée ChalametA deluxe hardcover edition of the best-selling science-fiction book of all time-part of Penguin Galaxy, a collectible series of six sci-fi/fantasy classics, featuring a series introduction by Neil Gaiman Winner of the AIGA + Design Observer 50 Books | 50 Covers competition Science fiction's supreme masterpiece, Dune will be forever considered a triumph of the imagination. Set on the desert planet Arrakis, it is the story of the boy Paul Atreides, who will become the mysterious man known as Muad'Dib. Paul's noble family is named stewards of Arrakis, whose sands are the only source of a powerful drug called "the spice." After his family is brought down in a traitorous plot, Paul must go undercover to seek revenge, and to bring to fruition humankind's most ancient and unattainable dream. A stunning blend of adventure and mysticism, environmentalism and politics, Dune won the first Nebula Award, shared the Hugo Award, and formed the basis of what is undoubtedly the grandest epic in science fiction.Penguin Galaxy Six of our greatest masterworks of science fiction and fantasy, in dazzling collector-worthy hardcover editions, and featuring a series introduction by #1 New York Times bestselling author Neil Gaiman, Penguin Galaxy represents a constellation of achievement in visionary fiction, lighting the way toward our knowledge of the universe, and of ourselves. From historical legends to mythic futures, monuments of world-building to mind-bending dystopias, these touchstones of human invention and storytelling ingenuity have transported millions of readers to distant realms, and will continue for generations to chart the frontiers of the imagination. The Once and Future King by T. H. White Stranger in a Strange Land by Robert A. Heinlein Dune by Frank Herbert 2001: A Space Odyssey by Arthur C. Clarke The Left Hand of Darkness by Ursula K. Le Guin Neuromancer by William Gibson For more than seventy years, Penguin has been the leading publisher of classic literature in the English-speaking world. With more than 1,700 titles, Penguin Classics represents a global bookshelf of the best works throughout history and across genres and disciplines. Readers trust the series to provide authoritative texts enhanced by introductions and notes by distinguished scholars and contemporary authors, as well as up-to-date translations by award-winning translators. von Herbert, Frank

Frank Herbert (1920-1986) published more than twenty-five books, including five Dune sequels. Born in Tacoma, Washington, and educated at the University of Washington, Seattle, he worked a wide variety of jobs-including TV cameraman, radio commentator, oyster diver, jungle survival instructor, lay analyst, creative writing teacher, reporter, and editor of several West Coast newspapers-before becoming a full-time writer. His son Brian Herbert continues to co-author new books in the Dune saga. Neil Gaiman (series introduction) is the #1 New York Times bestselling author of more than twenty books for readers of all ages, including American Gods, The Ocean at the End of the Lane, The Graveyard Book, Coraline, and the Sandman series of graphic novels. He is Professor in the Arts at Bard College.Brian Herbert (afterword) is the eldest son of Frank Herbert. He has co-authored numerous New York Times bestsellers in the Dune series and has written many critically acclaimed novels of his own. His biography of his father, Dreamer of Dune, was a finalist for the Hugo Award.Alex Trochut (cover designer) is an award-winning artist, graphic designer, illustrator, and typographer. He has designed for The New York Times, The Guardian, Nike, Adidas, The Rolling Stones, Coca-Cola, and Pepsi and was nominated for a 2016 Grammy Award for Best Recording Package. Born in Barcelona, Spain, he lives in Brooklyn.