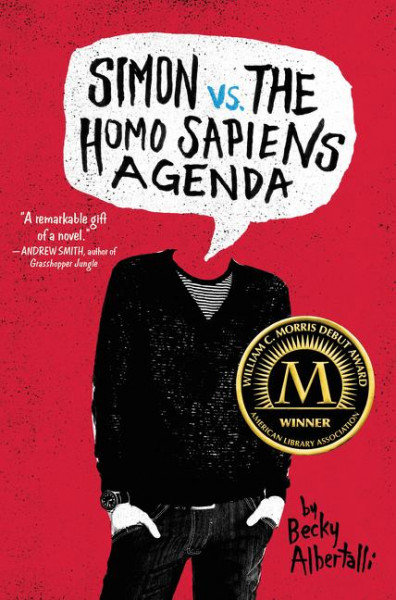 Simon vs. the Homo Sapiens Agenda

Simon vs. the Homo Sapiens Agenda

Now a major motion picture: Love, Simon, starring Nick Robinson and Katherine Langford!William C. Morris Award Winner: Best Young Adult Debut of the Year * National Book Award Longlist"A remarkable gift of a novel."?Andrew Smith, author of Grasshopper Jungle"I am so in love with this book."?Nina LaCour, author of Hold Still"Feels timelessly, effortlessly now."?Tim Federle, author of Better Nate Than Ever"The best kind of love story."?Alex Sanchez, Lambda Award-winning author of Rainbow Boys and Boyfriends with GirlfriendsSixteen-year-old and not-so-openly gay Simon Spier prefers to save his drama for the school musical. But when an email falls into the wrong hands, his secret is at risk of being thrust into the spotlight. Now change-averse Simon has to find a way to step out of his comfort zone before he's pushed out?without alienating his friends, compromising himself, or fumbling a shot at happiness with the most confusing, adorable guy he's never met.Incredibly funny and poignant, this twenty-first-century coming-of-age, coming out story?wrapped in a geek romance?is a knockout of a debut novel by Becky Albertalli.Plus don't miss Yes No Maybe So, Becky Albertalli's and Aisha Saeed's heartwarming and hilarious new novel, coming in 2020! von Albertalli, Becky

Becky Albertalli is the number one New York Times bestselling author of William C. Morris Award winner and National Book Award longlist title Simon vs. the Homo Sapiens Agenda (now a major motion picture, Love, Simon); The Upside of Unrequited; Leah on the Offbeat; the Simonverse novella Love, Creekwood; What If It's Us (cowritten with Adam Silvera); Yes No Maybe So (cowritten with Aisha Saeed); and most recently, Kate in Waiting. Becky lives with her family in Atlanta. You can visit her online at www.beckyalbertalli.com.