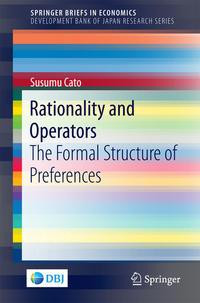 Rationality and Operators
The Formal Structure of Preferences

This unique book develops an operational approach to preference and rationality as the author employs operators over binary relations to capture the concept of rationality. A preference is a basis of individual behavior and social judgment and is mathematically regarded as a binary relation on the set of alternatives. Traditionally, an individual/social preference is assumed to satisfy completeness and transitivity. However, each of the two conditions is often considered to be too demanding; and then, weaker rationality conditions are introduced by researchers. This book argues that the preference rationality conditions can be captured mathematically by "operators," which are mappings from the set of operators to itself. This operational approach nests traditional concepts in individual/social decision theory and clarifies the underlying formal structure of preference rationality. The author also applies his approach to welfare economics. The core problem of 'new welfare economics,' developed by Kaldor, Hicks, and Samuelson, is the rationality of social preference. In this book the author translates the social criteria proposed by those three economists into operational forms, which provide new insights into welfare economics extending beyond 'new welfare economics.' von Cato, Susumu