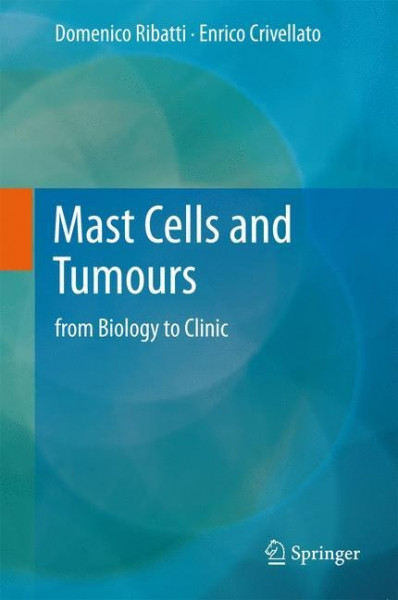 Mast Cells and Tumours
from Biology to Clinic

Mast cells are versatile, tissue-homing secretory cells, which were first described by Paul Ehrlich in 1878. Mast cells have long been implicated in the pathogenesis of allergic reactions and certain protective responses to parasites. Their functional role, however, has been discovered to be increasingly complex and multifarious. Mast cells have been implicated in various cell-mediated immune reactions, being found in tissues from multiple disease sites, and as a component of the host reaction to bacteria, parasite, and even virus infections. They have also been shown to participate to angiogenic and tissue repair processes after injury. The importance of a possible functional link between chronic inflammation and cancer has long been recognized. As most tumours contain inflammatory cell infiltrates, which often include plentiful mast cells, the question as to the possible contribution of mast cells to tumour development has progressively been emerged. In this book, the general biology of these cells, their development, anatomical distribution and phenotype as well as their secretory products will first be discussed. The biology of tumour cells, their structural and molecular characteristics, the specificity of the tumour microenvironment and the development of a vascular network in the tumour context will be analyzed. The involvement of mast cells in tumour biology and tumour fate will then be considered, with particular emphasis on the capacity of these cells to stimulate tumour growth by promoting angiogenesis and lymphangiogenesis. The last chapter suggest that mast cells may serve as a novel therapeutic target for cancer treatment. von Crivellato, Enrico und Ribatti, Domenico