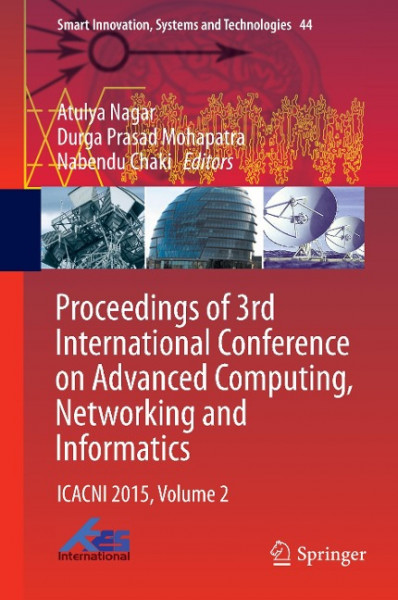 Advanced Computing, Networking and Informatics are three distinct and mutually exclusive disciplines of knowledge with no apparent sharing/overlap among them. However, their convergence is observed in many real world applications, including cyber-security, internet banking, healthcare, sensor networks, cognitive radio, pervasive computing amidst many others. This two volume proceedings explore the combined use of Advanced Computing and Informatics in the next generation wireless networks and security, signal and image processing, ontology and human-computer interfaces (HCI). The two volumes together include 132 scholarly articles, which have been accepted for presentation from over 550 submissions in the Third International Conference on Advanced Computing, Networking and Informatics, 2015, held in Bhubaneswar, India during June 23-25, 2015. von Nagar, Atulya und Mohapatra, Durga Prasad und Chaki, Nabe

Prof. Atulya Nagar holds the Foundation Chair as Professor of Mathematical Sciences at Liverpool Hope University where he is the Dean of Faculty of Science. He has been the Head of Department of Mathematics and Computer Science since December 2007. A mathematician by training he is an internationally recognised scholar working at the cutting edge of applied non-linear mathematical analysis, theoretical computer science, operations research and systems engineering and his work is underpinned by strong complexity-theoretic foundations. He has an extensive background and experience of working in Universities in the UK and India. He has edited volumes on Intelligent Systems, and Applied Mathematics; he is the Editor-in-Chief of the International Journal of Artificial Intelligence and Soft Computing (IJAISC) and serve on editorial boards for a number of prestigious journals such as the Journal of Universal Computer Science (JUCS). Prof Nagar received a prestigious Commonwealth Fellowship for pursuing his Doctorate (DPhil) in Applied Non-Linear Mathematics, which he earned from the University of York in 1996. He hold BSc (Hons.), MSc, and MPhil (with Distinction) from the MDS University of Ajmer, India. Dr. Durga Prasad Mohapatra received his PhD from Indian Institute of Technology Kharagpur. He joined the Department of Computer Science and Engineering at the National Institute of Technology, Rourkela, India in 1996, where he is presently serving as Associate Professor. His research interests include software engineering, real-time systems, discrete mathematics, and distributed computing. He has published more than thirty research papers in these fields in various international Journals and Conferences. He has received several project grants from DST and UGC, Govt. of India. He has received the Young Scientist Award for the year 2006 by Orissa Bigyan Academy. He has also received the Prof. K. Arumugam National Award and the Maharashtra State National Award for outstanding research work in Software Engineering for the years 2009 and 2010, respectively, from the Indian Society for Technical Education (ISTE), New Delhi. He is going to receive the Bharat Sikshya Ratan Award for significant contribution in academics awarded by the Global Society for Health and Educational Growth, Delhi. Prof. Nabendu Chaki is a Professor in the Department Computer Science & Engineering, University of Calcutta, Kolkata, India. Dr. Chaki did his first graduation in Physics the legendary Presidency College in Kolkata and then in Computer Science & Engineering, University of Calcutta. He has completed Ph.D. in 2000 from Jadavpur University, India. He is sharing two US patents and one patent in Japan with his students. Prof. Chaki is quite active in developing international standards for Software Engineering. He represents the country in the Global Directory (GD) for ISO-IEC. Besides editing more than 20 books in different Springer series including LNCS, Dr. Chaki has authored 5 text and research books and about 130 peer-reviewed research papers in Journals and International conferences. His areas of research interests include distributed computing, image processing and software engineering. Dr. Chaki has served as a Research Assistant Professor in the Ph.D. program in Software Engineering in U.S. Naval Postgraduate School, Monterey, CA. He is having strong and active collaborations in US, Europe, Australia and other institutes and industries in India. He is a visiting faculty member for many Universities in India and abroad. Dr. Chaki has been the Knowledge Area Editor in Mathematical Foundation for the SWEBOK project of the IEEE Computer Society. Besides being in the editorial board for several International Journals, he has also served in the committees of more than 50 international conferences. Prof. Chaki is the founder Chair of ACM Professional Chapter in Kolkata.