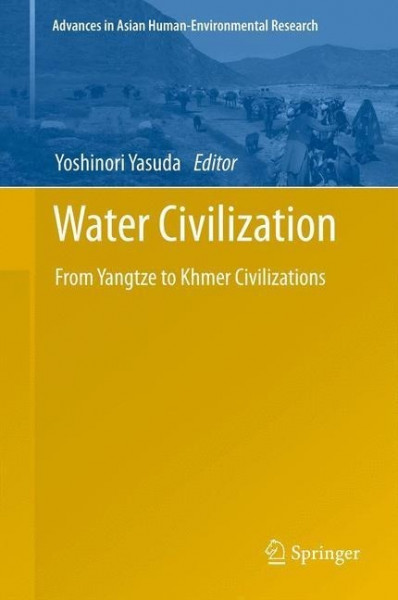 Water Civilization: From Yangtze to Khmer Civilizations comprises three major topics: 1) Discovery of the origin of rice agriculture and the Yangtze River civilization in southern China was mainly based on investigation of the Chengtoushan archaeological site, the earliest urban settlement in East Asia. The origin of rice cultivation can be traced back to 10000 BC, with urban settlement starting at about 6000 BP; 2) The Yangtze River civilization collapsed around 4200 BP. Palaeoenvironmental studies including analyses of annually laminated sediments in East and Southeast Asia indicate a close relationship between climate change and the rise and fall of the rice-cultivating and fishing civilization; and 3) Migrations from southern China to Southeast Asia occurred after about 4200 BP. Archaeological investigation of the Phum Snay site in Cambodia, including analyses of DNA and human skeletal remains, reveals a close relationship to southern China, indicating the migration of people from southern China to Southeast Asia. This publication is an important contribution to understanding the environmental history of China and Cambodia in relation to the rise and fall of the rice-cultivating and fishing civilization, which we call water civilization. von Yasuda, Yoshinori