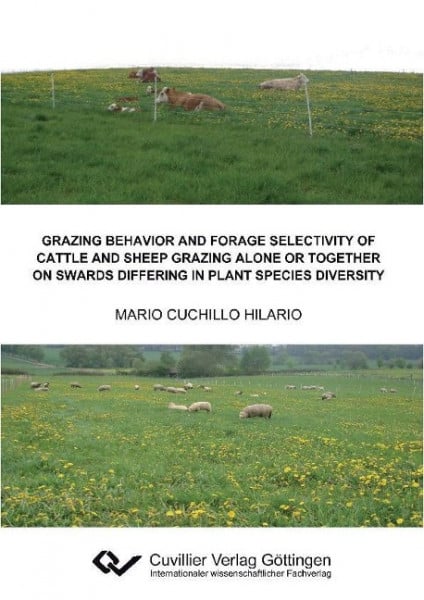 Grassland composition and animal species may modify the grazing efficiency and ingestive behavior at pasture. However, precise knowledge on potential interactions between sward diversity and co-grazing is not available. Thus, a trial was conducted to evaluate the behavior patterns and forage selectivity of cattle and sheep grazing alone or together on grass swards differing in botanical composition. The experiment was carried out on mesotrophic permanent grassland in the Solling Uplands of Lower Saxony, Germany from May to September of 2009 and 2010. Species diversity of paddocks was manipulated by the use of herbicides resulting in grass-dominated swards (7 species per 9 m2) in contrast to untreated diverse swards (14 species per 9 m2) with grasses, forbs and legumes. Each sward type was combined with three grazing treatments: C= cattle mono-grazing; S= sheep mono-grazing and CS= cattle and sheep cograzing. The six treatments were set up on paddocks of 0.5 ha each, replicated three times in blocks that were grazed rotationally. The main behavior patterns (grazing, walking, and ruminating) were recorded by conducting scan sampling every ten minutes from six a.m. to ten p.m. Secondary patterns (bites per minute, steps per minute, and bites per step) were obtained per core animal and observation day. Intake choices of Dactylis glomerata, Festuca pratensis, Lolium perenne, Phleum pratense, Taraxacum officinale, and Trifolium repens were obtained as follows: species were visually assessed in five 0.5 m2 subplots per plot immediately before and after a period of three days grazing on a plot. Jacobs¿ selection index (JSI) was used to quantify the intake preference for single target species in relation to their proportion in the sward. JSI = ci - ai / ci + ai - 2ciai; where ci= % forage in the diet and ai = % forage in the pasture. Here, ai was evaluated by the difference between the percentage mass of each species before and after three days of grazing. For behavior patterns, there were important differences between sheep and cattle. Cattle varied their time budget and grazing behavior depending on the presence of sheep. However, plant diversity had no effect on cattle behavior. For sheep behavior, plant diversity rather than mono or co-grazing management was the determinant factor. Cattle mono-grazing on diverse swards spent more time grazing at lower ingestive rates. P. pratense was the most preferred forage species (JSI=0.62). L. perenne, T. officinale and T. repens were also highly preferred regardless of sward composition or type of grazer (JSI = 0.47, 0.32 and 0.27, respetively). Co-grazing facilitated a more homogeneous consumption of the main forage species. Co-grazing might have the potential to better maintain grassland biodiversity.