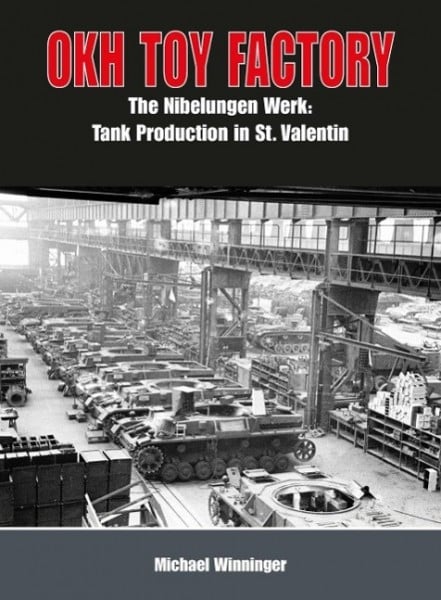 Behind the camouflage name "OKH Toy Factory" plans to build a new tank factory in Austria were hidden. Most secret have been all plans to build the tank works and to run the production. By building this wide spread factory, the small village of St. Valentin was rapidly developed to a most important armament place in the Third Reich. Although hindered by war restrictions the tank factory was growing from 1941 - 1945 to become biggest manufacturer of Panzerkampfwagen IV. The author, Michael Winninger, used original documents of the former Nibelungenwerk GmbH and official authorities as well as photographs for his deep research. He lives in closest distance to the former "Nibelungenwerk" and was researching the topic for years. This book is the standard publication on the most important German tank manufacturing company of World War II. von Winninger, Michael

The author, Michael Winninger, was born on April 27, 1973 in Steyr, Austria and grew up in the Herzograd suburb of St.?Valentin, where he also attended elementary and high school. Michael Winninger later studied at the Federal Higher Institute for Technology in Steyr, graduating in electronics and IT. The St. Valentin branch of the Winninger family has been linked to the railroad for decades and Michael Winninger's fascination with it was awakened at a very early age. After completing his national service, he trained as a railroad traf?c regulator with the Austrian Federal Railways, remaining in that function until the end of 2002. He then transferred internally to become a specialist in the vocational and further education sector, a move that also gave him the opportunity to qualify as a railroad traction vehicle driver and as a traction engineer. In addition to his activities as a specialist trainer, he was also nominated as examiner in the traction vehicle examination committee. At grade school already, Winninger became interested in contemporary history, and in particular, World War II. Growing up in the immediate vicinity of the Nibelungenwerk, the history of this industrial facility was of direct interest to him, all the more so because his family had come into contact with it in various aspects. The book lover with widespread interests had long felt the urge to write a book documenting the history of the former Nibelungenwerk in as much depth, and as accurately as possible. He is also the author of "Das Nibelungenwerk 1939 bis 1945 - Panzerfahrzeuge aus St.?Valentin" [The Nibelungenwerk 1939 to 1945 - Armored Vehicles made in St.?Valentin] (published 2009 by Sutton Verlag, Erfurt). Michael Winninger is married, the father of two children and lives in the Herzograd suburb of St. Valentin.