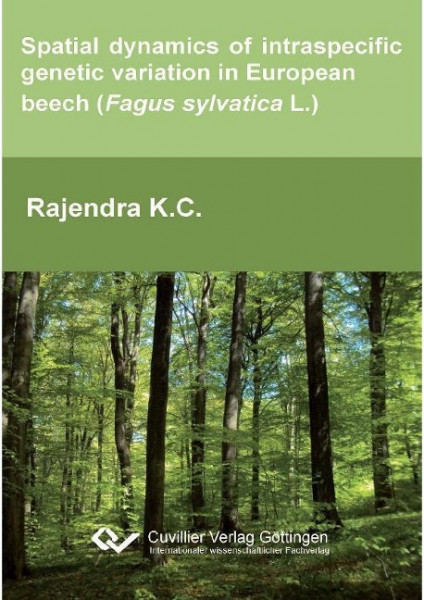 Fagus sylvatica is one of the most important tree species in Europe. Due to its extensive distributionand dominance in its range, the performance of European forests in the contexts of perceivedclimate change will largely depend on the reaction of beech forests. Adequate informationabout the genetic diversity and structure of the species is indispensable for the conservation andsustainable utilization of the forests. Forest management systems currently in use in Germany areconsidered sustainable. However, their impact on the genetic diversity and spatial genetic structureof F. sylvatica is largely unknown. In these contexts, the main objectives of this dissertationwere a) to assess the genetic diversity and differentiation of F. sylvatica at different spatialscales, b) to determine the level and magnitude of fine-scale genetic structure of the beechstands, c) to investigate the effect of forest management activities on the genetic diversity andfine-scale genetic structure of the beech stands independent of the marker used and d) to comparemicrosatellite and AFLP markers to estimate genetic diversity and structure of the stands,and their applicability to detect management impacts on genetic structure of the stand.Exhaustive sampling was performed in most of the plots to harvest the leaf samples from 3620beech trees from 30 different stands located at three different regions (exploratories) coveringmajor differences in the population histories and natural geographical distribution of beech forestsin Germany. Ten beech stands, including managed and unmanaged, were sampled at eachexploratory. Within population and among population genetic variability and fine-scale geneticstructure was assessed by using two types of markers, codominant and biparentally inheritedmicrosatellite (six SSRs and three EST-SSRs) for all individuals and dominant AFLP markers(126 loci) for a subset of 100 individuals from each plot across six beech stands. The differencesin genetic diversity, differentiation and SGS parameters between managed and unmanaged beechstands were analyzed and their significance levels were estimated for all stands together and separatelyat exploratory level.