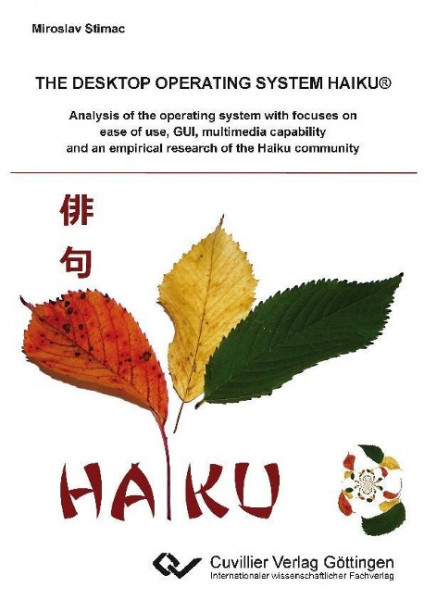 Haiku® is an open source, light, fast and user-friendly operating system that is inspired by the "Multimedia Operating System¿ BeOS(TM). At the moment Haiku is still under development and the latest release was Alpha 2 which is meant to be used only for testing. Unlike many other open source operating systems, such as Linux or FreeBSD, Haiku sets the focus on personal computing and the graphic user interface (GUI) is not just an "Add-On¿ or "additional windows management system¿, but it is an essential part of the kernel. This thesis analyses Haiku, especially regarding the ease of use, the GUI and the multimedia capabilities, by giving an introduction to Haiku, an overview of the history and features of BeOS and a lot of general and technical information about the architecture, the easy of use, the GUI and some other aspects of operating systems in general respectively in the special case of Haiku. In order to recognize the main fields of application of Haiku and the expectations of the users regarding the further development of Haiku, the Haiku community has been analysed by doing an online survey that was answered by more than one thousand persons. von Stimac, Miroslav